I asked all of you what you REALLY want to eat on Christmas morning, or any morning for that matter 🙂 think of Easter breakfast too! BTW- that was super fun to read all of your messages. There were a lot of messages! We decided to practice your favorite Christmas breakfast, because I had never made it before. And guess what? The first time was a success. Can you guess what we made? Cinnamon Rolls. Everyone wants to indulge on with Cinnamon Rolls! And the vote was split between Cinnamon Rolls made from scratch verses store bought Cinnamon Rolls. We made our Cinnamon Rolls in our cast iron pan, a non-toxic pan. We also made our favorite Frittata, a little something healthy to balance out the sweet in our new green pans! Sharing a Christmas brunch idea with you. This is a recipe that you could make for any special occasion! I shared on a different blog post that I was looking for some non-toxic pans to replace the pans that we were cooking with daily (I had no idea what they were made out of).

I did a lot of research and decided to go with THESE Green Pans. The Green Pans are a  higher-end Belgian brand that makes nonstick, non-toxic cookware coated with Thermolon – a ceramic nonstick layer derived from sand. It contains no lead, cadmium, PFAS, or PFOA, like other nonstick pans can. It is heat resistant up to 450°C, meaning that it won’t blister or release toxic fumes when overheated. (I bought my sister these green pans and she really likes them- I don’t recommend putting any in the dishwasher).

We have also been using THIS Cast Iron Pan. Kevin has gotten really good at cooking with it! It is really the only pan he uses. Fun to watch him prefect it! The main thing we have learned was not to use soap when cleaning it. Just wash it out with hot water and wipe it down oil. And we learned from a lot of you to use salt to clean it! Also before you cook anything in it make sure to heat up the pan with oil BEFORE you add food. I did a lot of research on what Cinnamon Roll recipe to use. I wanted one that was quick, not a lot of steps (seeing all the steps OVERWHELMS me!!) and one that was tested by one of you. I actually ended up trying a Cinnamon Roll recipe from a reader! Haylee Bock, it is her mom’s recipe that she says she is famous for! Kevin loved it and he is the real test, he loves a good Cinnamon Roll. Many of you said you get the frozen Rhodes Rolls and you like them or the Trader Joe’s rolls. We have made the Trader Joe’s rolls and honestly these home-made rolls taste so much better, totally worth the effort!! Many of you also said you like Pioneer Women’s Cinnamon Roll Recipe, I looked at it and it looked a lot more indulgent then these. So I went with the recipe below….

You can roll them, slice them, and place them on the sheet the night before. Just cover them with wax wraps and keep them in the fridge overnight. Pull them out maybe 30 minutes to an hour before you want to bake them (so like while the kids open stockings or their first couple presents) and that will save you time in the morning so you can relax and enjoy your Christmas morning!

Just make sure to dust your wax wrap with flour before your cover them. I learned that the hard way!

**I did make this recipe GLUTEN FREE with Cup for Cup flour and they were a success. I just replaced the regular white flour for Cup for Cup Gluten Free Flour. They do not get a "fat and fluffy" as the original. But still taste good.

You can roll the cinnamon rolls, slice them, and place them on the sheet the night before. Just cover them with your beeswax wraps or plastic wrap and keep them in the fridge overnight. Pull them out maybe 30 minutes to an hour before you want to bake them (so like while the kids open stockings or their first couple presents) and that will save you time in the morning so you can relax and enjoy your Christmas morning! Also if you do make the Cinnamon Rolls in a cast iron pan then I would heat up the cast iron pan on your stove and melt a tablespoon or two in the bottom of the pan. Then add the rolls and put in the oven. This shows the step when you mix the yeast with the water. I actually did it twice because the first time it didn’t foam up like this. So give it 5- 10 minutes and if it doesn’t foam up then do that step over! THIS Kitchen Aid Mixer is one of my favorite home purchases. It made making Cinnamon Rolls so easy when you use the kneading tool. Rather than hand kneading for 10 minutes, I just sit the timer and let the Kitchen Aid Mixer get to work! Above is what they looked like after I rolled them. You don’t even have to let them rise. Also I learned that I need to make sure to roll them out more evenly. See how some were mini? I kind-of liked the mini size too (less tempting to over-eat).

You don’t have to make these in a cast iron pan, but they were really good this way!! BTW- I am going to try a gluten-free flour tonight and I will report back! 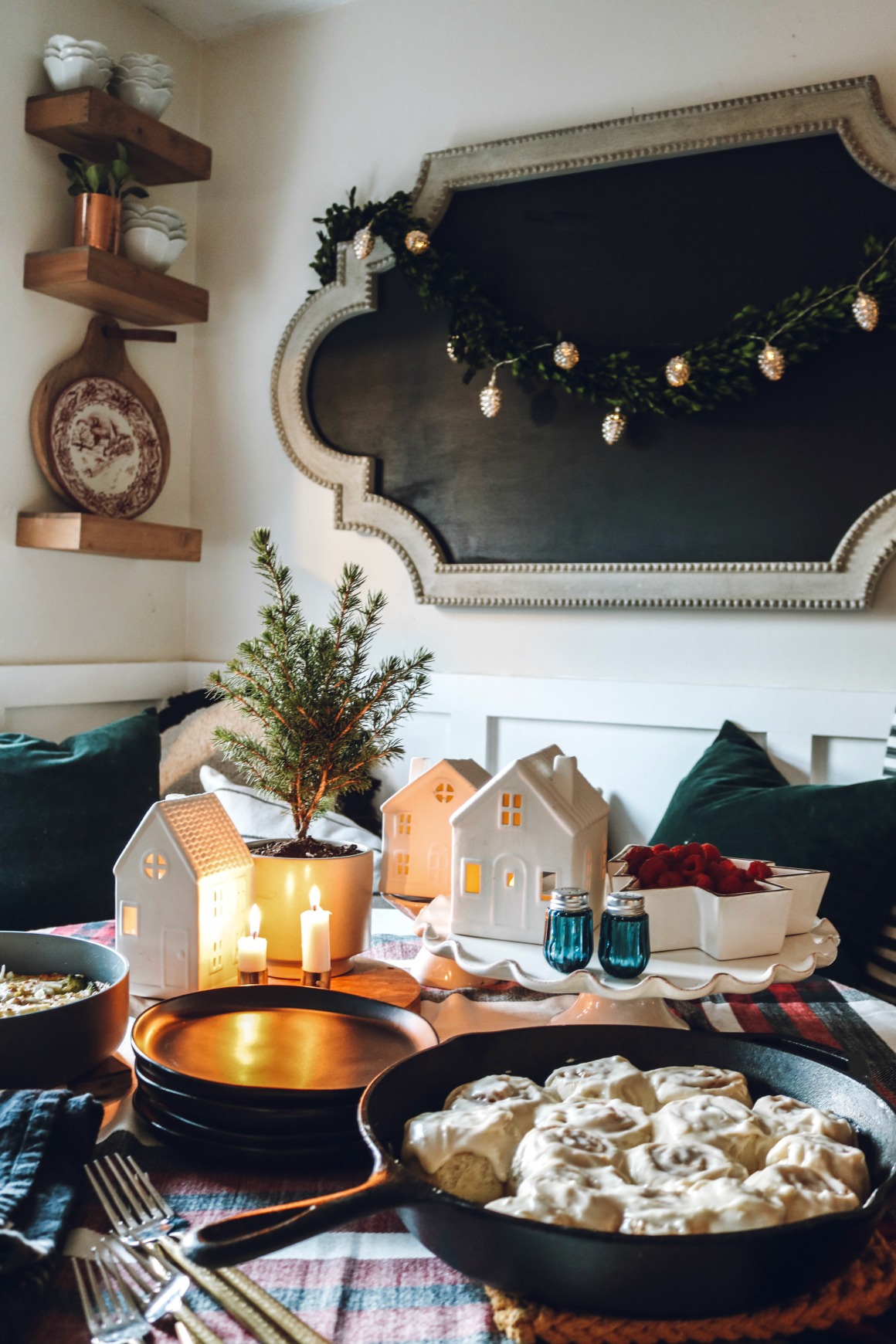 I have shared this exact Frittata recipe before HERE. The only difference this time was that we just used green and red veggies to be super festive for a Christmas Brunch. We make a frittata once a week as a dinner and sometimes have enough for my breakfast the next day! Using our new Green Pans for the Frittata was a major perk. Especially because they come with lids. So for the last part you put a lid on it so the eggs can cook. Then it goes in the oven for a couple minutes to boil the top and melt the cheese, if you add any cheese. We do half and half. PS- this is a great recipe to make for any special occasion! We also make for easter too!