We are still in Utah with so many family and friends, we can’t help but do a couple makeovers! Kevin always teases that Utah isn’t a vacation, since he was born and raised here. We have a fun vacation planned in a few short weeks to Hawaii. So we are going to keep doing our favorite thing- makeovers!!! Today we are sharing a guest room makeover. Which is kind-of selfish, since it is the guest room we stay in when we come to Utah at my parents house.

I jokingly told Kevin I got him a bed for Christmas. Which is kind-of true. He really didn’t like the bed that was in the guest room at my parents house. The headboard is so big and heavy and just leaning against the wall. And before you jump to conclusions….it was annoying when we were SLEEPING, our pillows would fall between the headboard and the mattress and get stuck. Or you turn ever so lightly and the headboard would bang- go ahead jump to conclusions now.

So when we made over Robins Bedroom, we gave her this queen fabric bed, which was so affordable. I instantly ordered one for my parents guest room too. And you know the story- if you give a mouse a cookie, she is going to want milk to go with it! So the milk in this case was new bedding and a board and batten accent wall (obviously).

Thank you Urban Outfitters for partnership 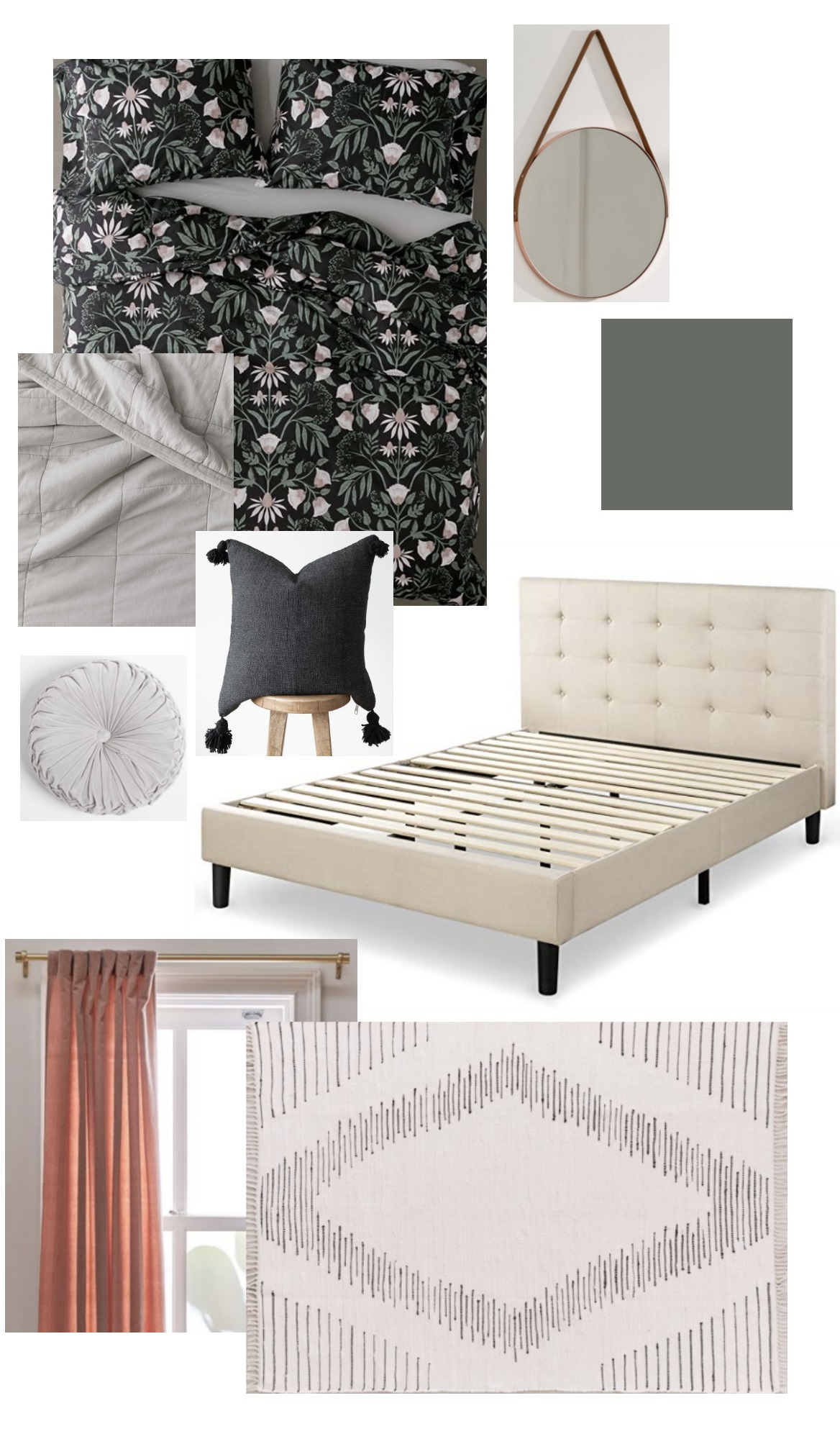 I already had this white rug leftover from a makeover I did over the summer, that I didn’t end up using. So the rug was basically my starting point in the design plan. Next I found this duvet, it is under $80 and such a statement and contrast with the rug. 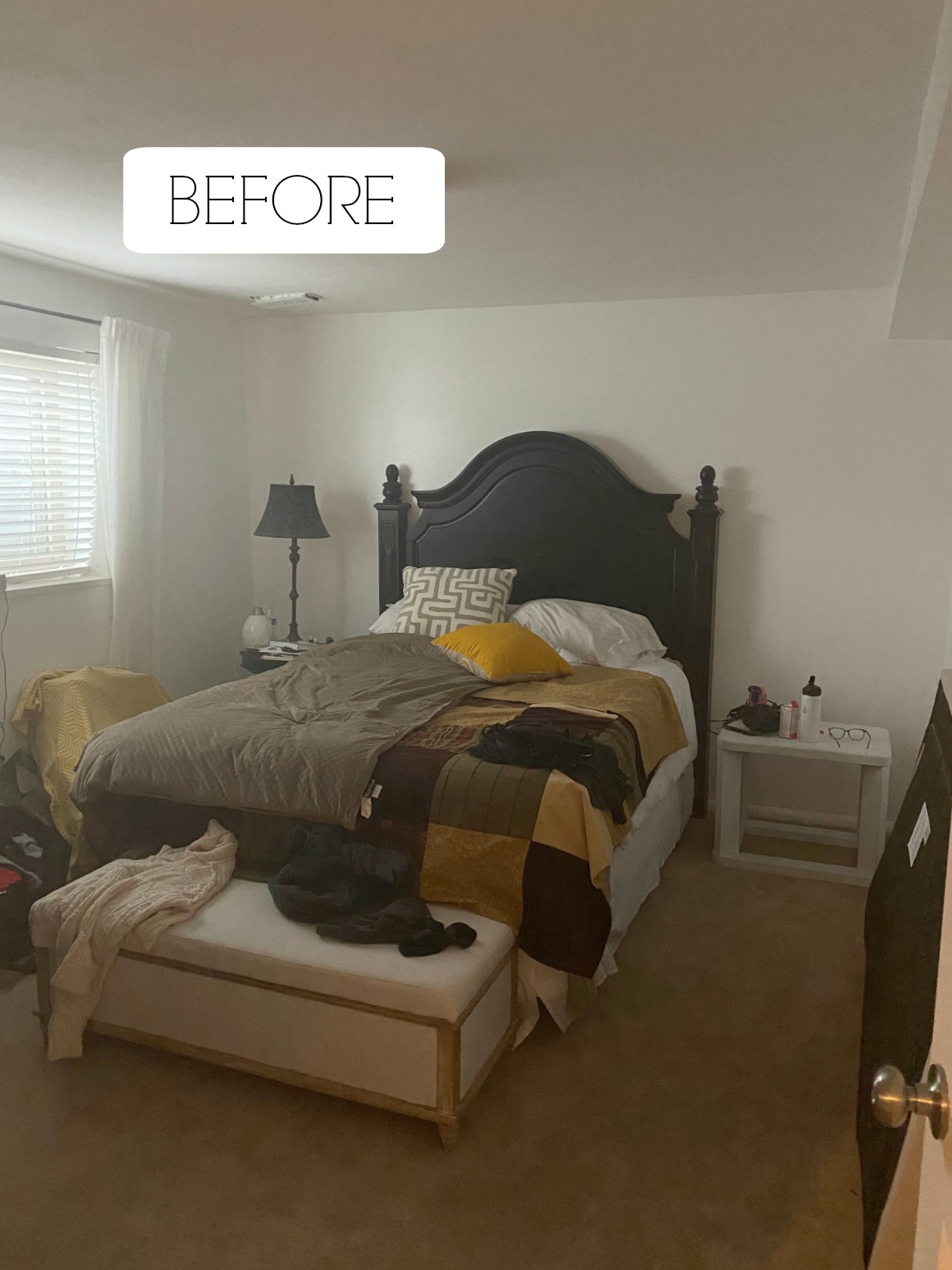 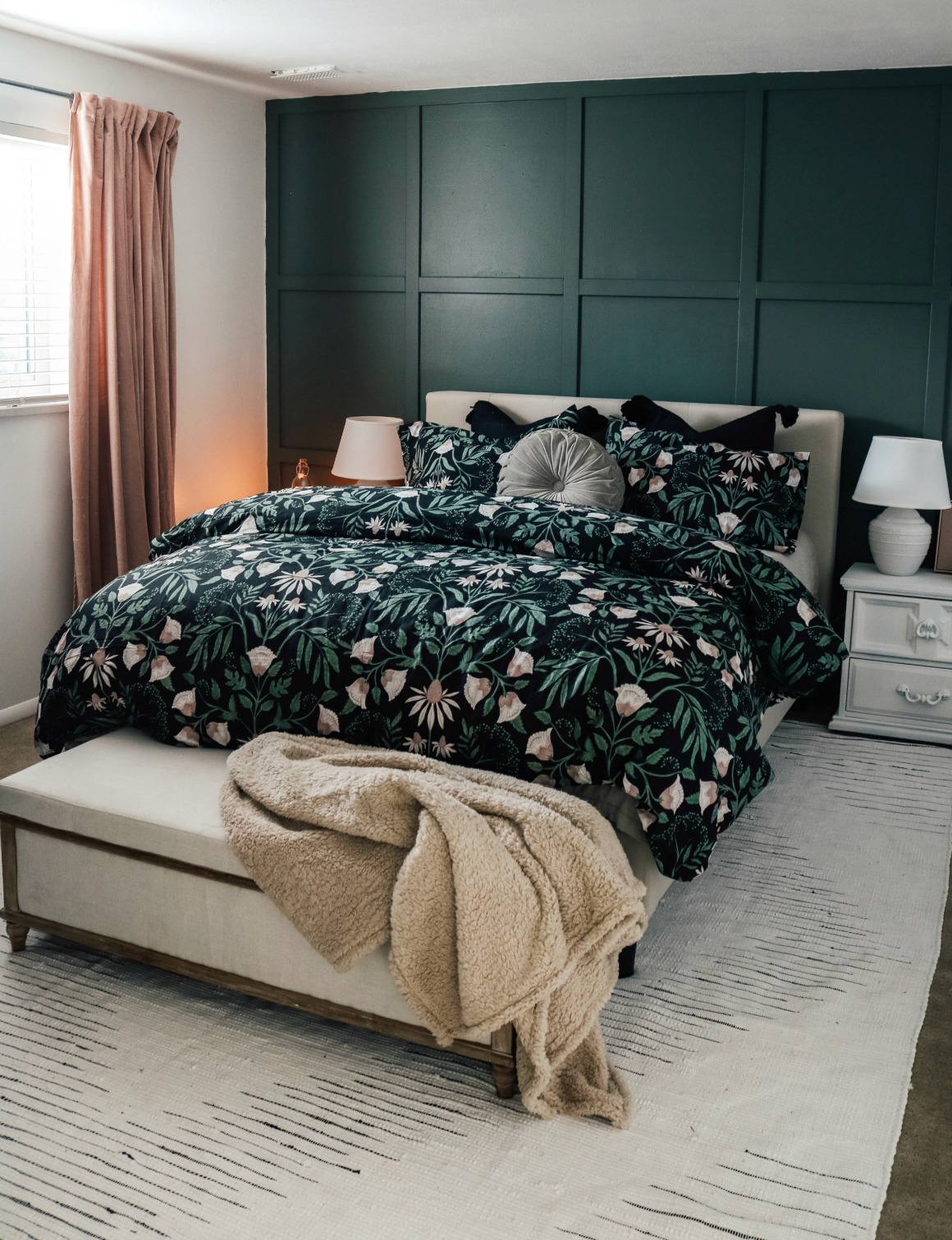 I will admit it was messy before, because of us. We had Christmas gifts in there we were hiding and really didn’t put things in a specific spot, because we didn’t take the time to establish that specific spot. Now we have two nightstands and took the time to organize all the stuff we brought. 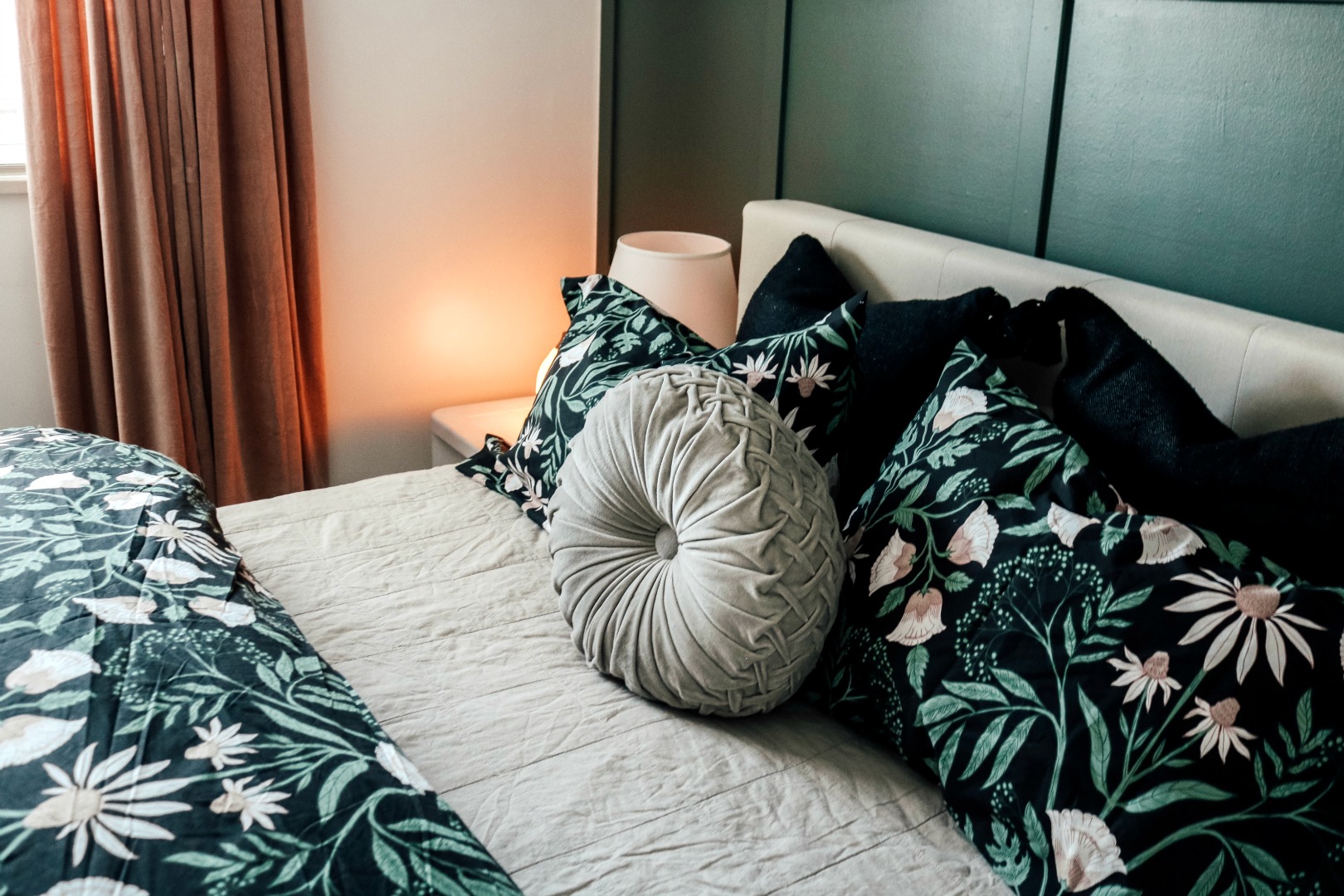 Don’t you just love the bedding?? I do!! It is simple, yet makes a statement. Also it is super affordable. My mom was surprised where I found it all- Urban Outfitters!  Mostly all of their bedding only goes up to a queen size, so keep that in mind. The Gray Quilt is super light-weight and a really nice quilt for the price, it was under $80 (on sale). Floral Duvet with matching shams is under $80 too! I just loved all of the colors in this duvet!! Then I used these Black Tassel Pillows and this Round Gray Pillow as the extra accent pillows. 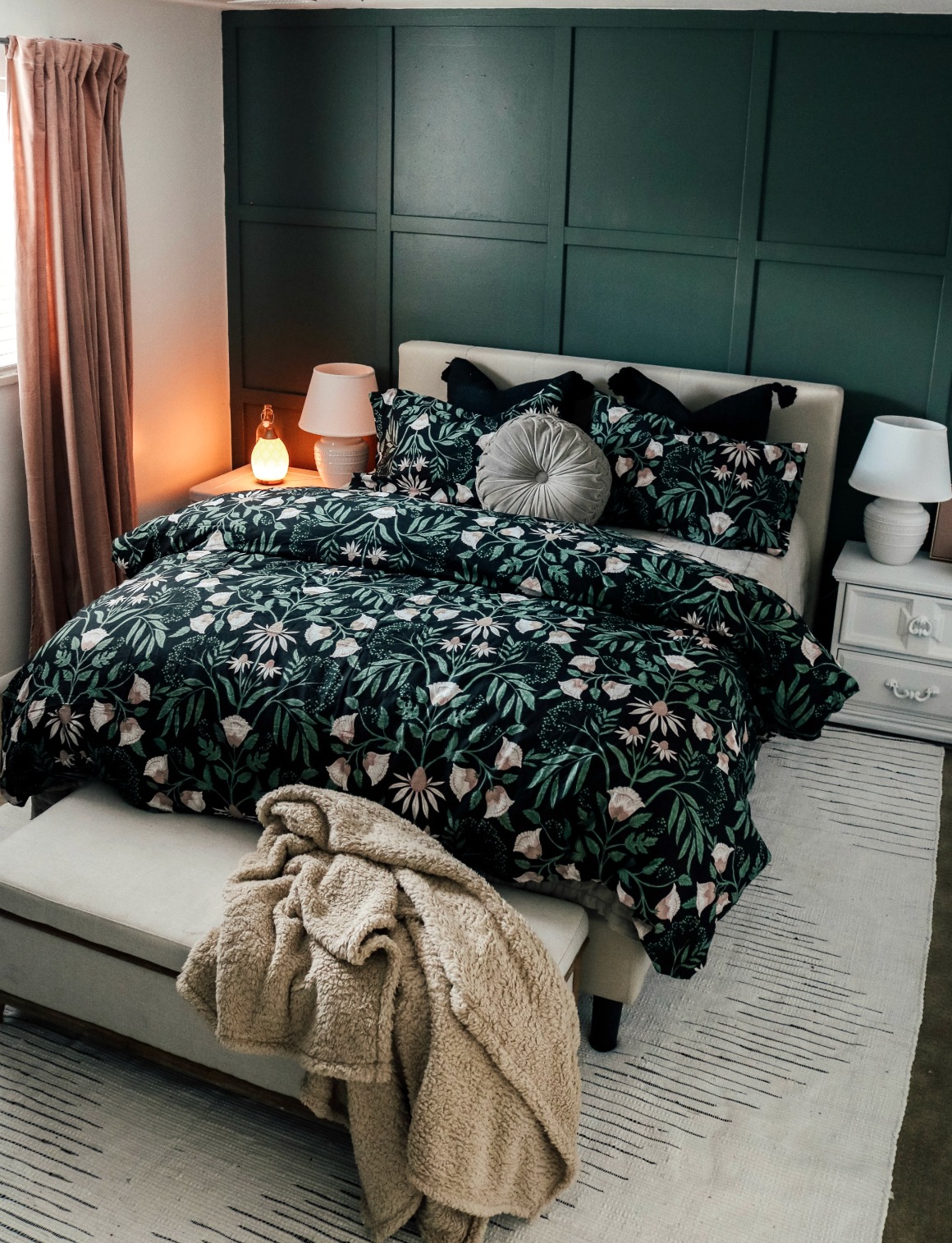 I do want to make sure to mention that I used TWO duvet inserts inside the duvet. I tried just one and it was too flat for my liking. The duvet has nice corner ties that you can attach your duvet insert to, so it stays in place. I actually just used two Ikea inserts (called RODTOPPA), that don’t have a place to tie the duvet to, so I tied the duvet around the corners (picture below) or you can buy duvet clips to attach an inexpensive duvet to. (See in the photo below- the top photo I have just one duvet insert and the middle shows how I just tied the corner around the duvet and the last photo shows the duvet with two inserts!) 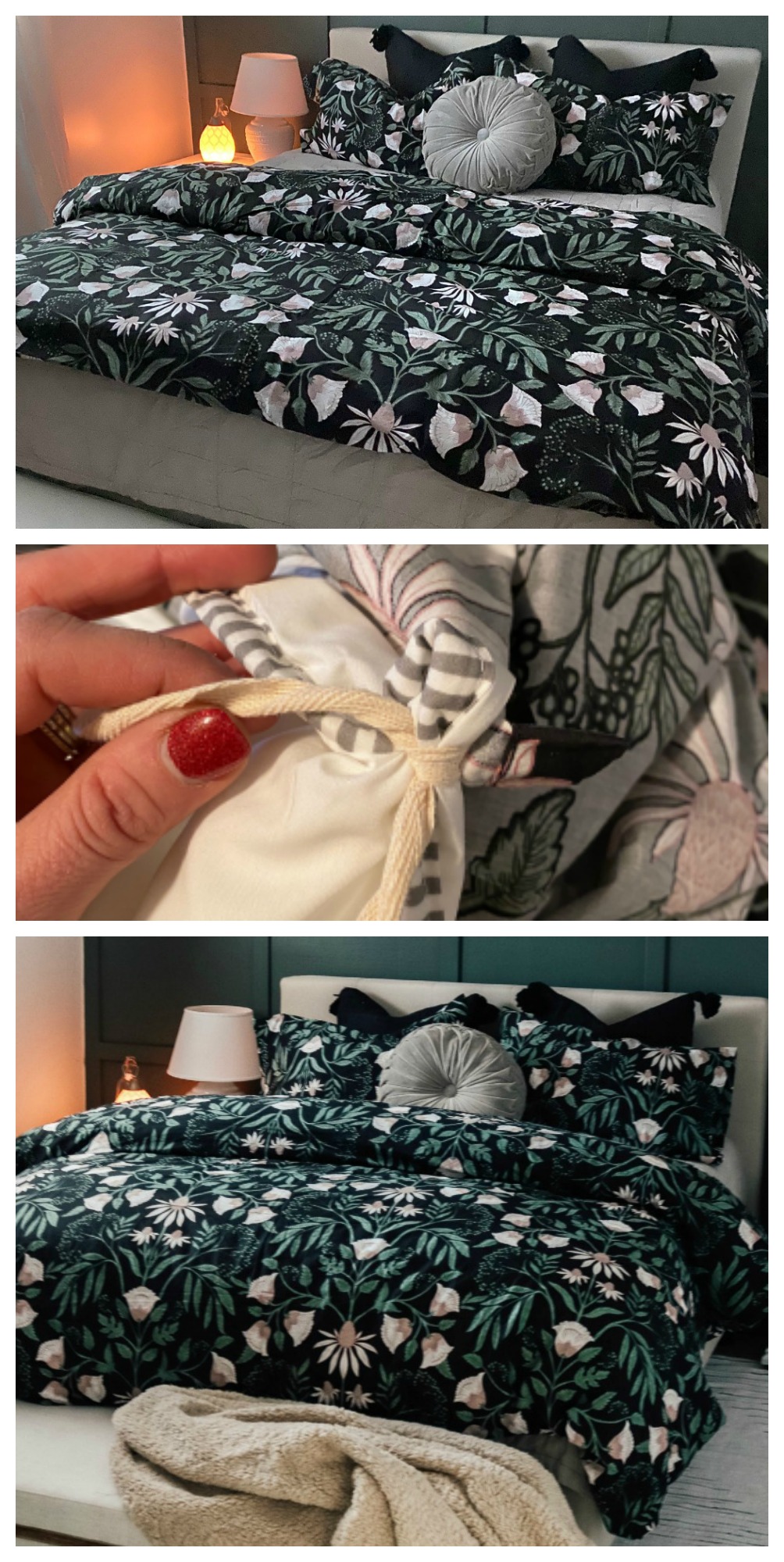 Walls Kevin did board and batten on the walls and then added trim in the center to make squares. It took him about 6 hours to complete. And it was his first time doing it. We painted them in Gunmetal Gray, from Glidden. It is a dark gray/green and I LOVE the color so much!!!! New favorite paint color. I randomly picked it at Home Depot after 5 minutes at looking at paint samples. I really liked that the green pulls out the green in the duvet. 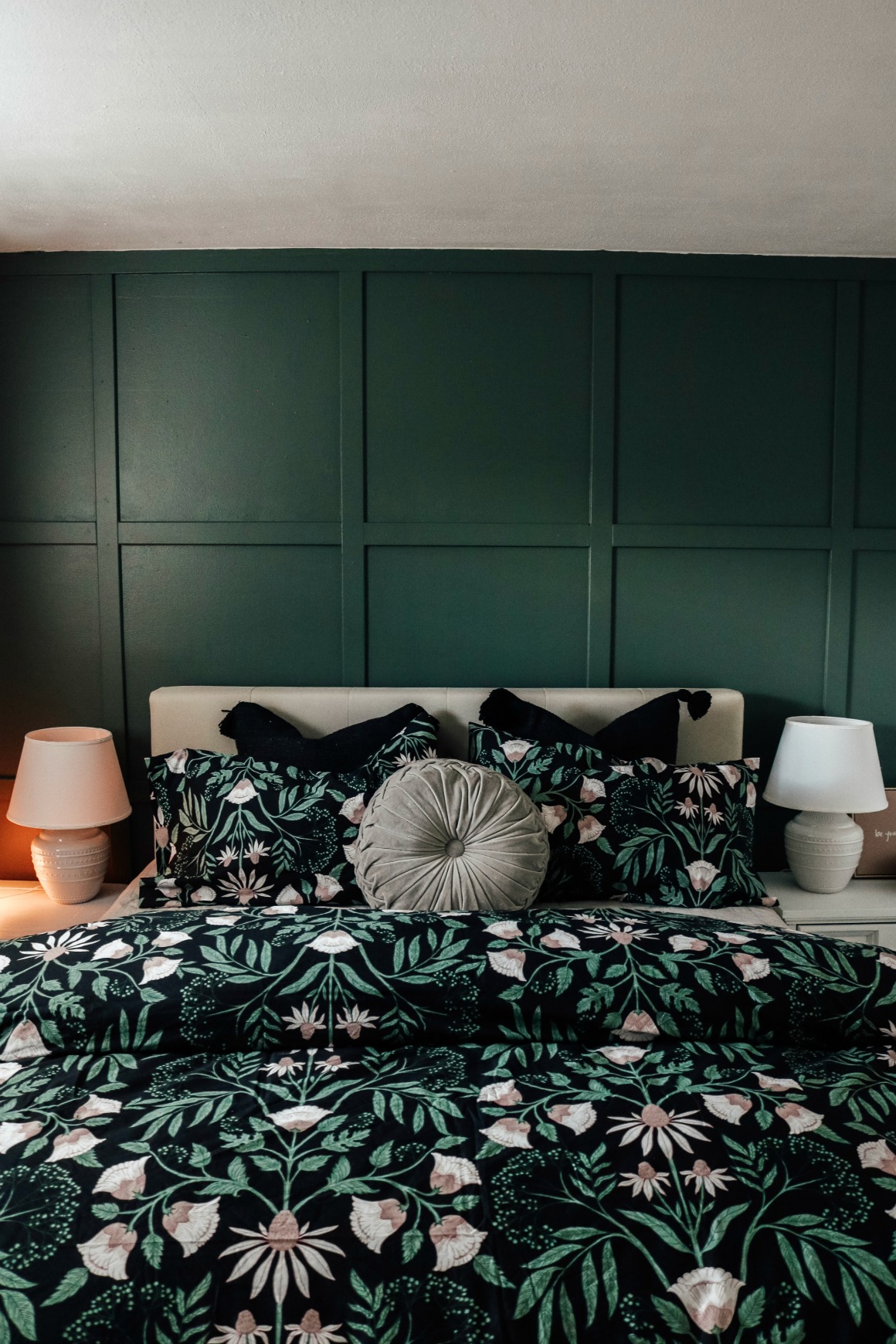 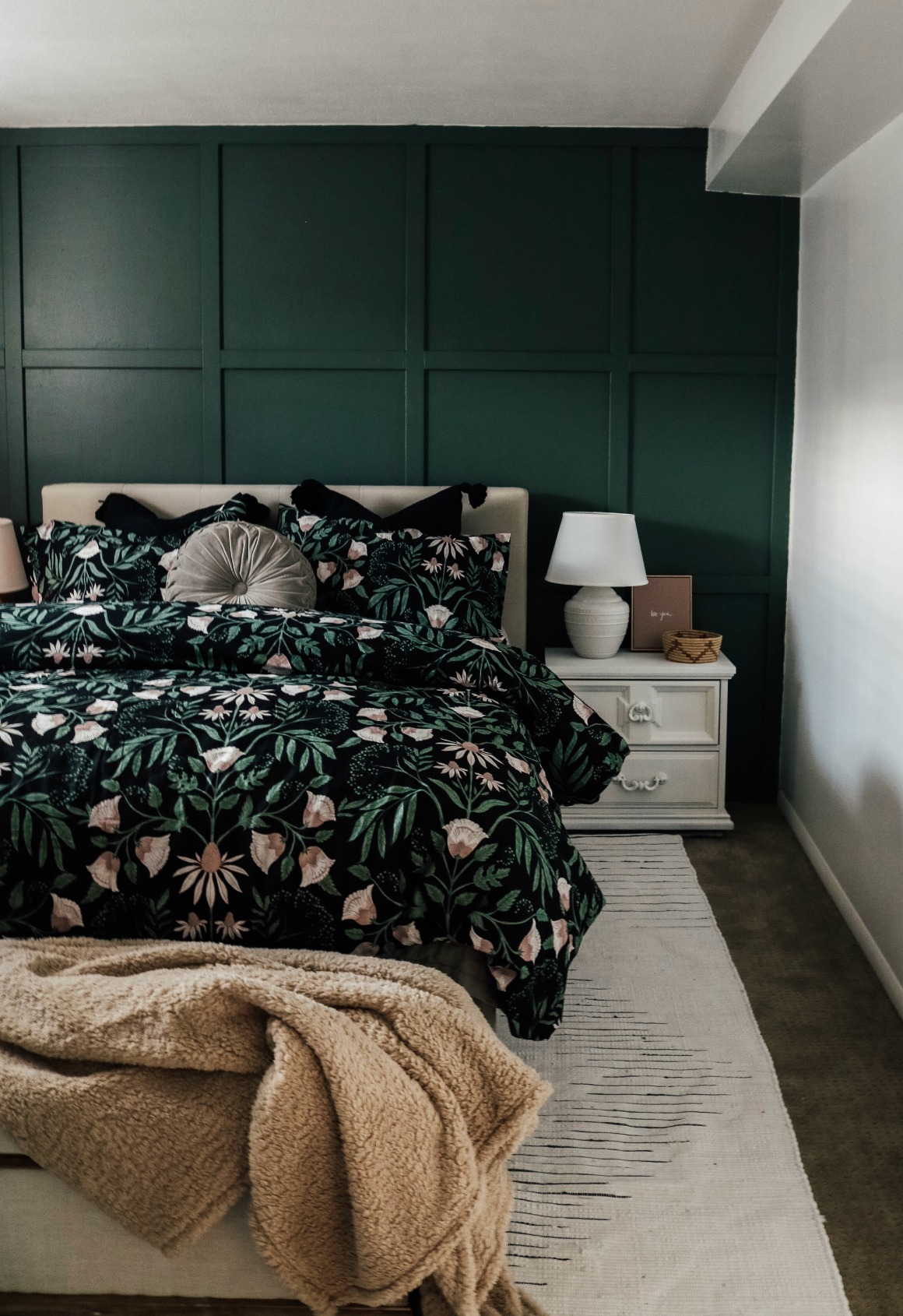 Board and Batten Square Details- 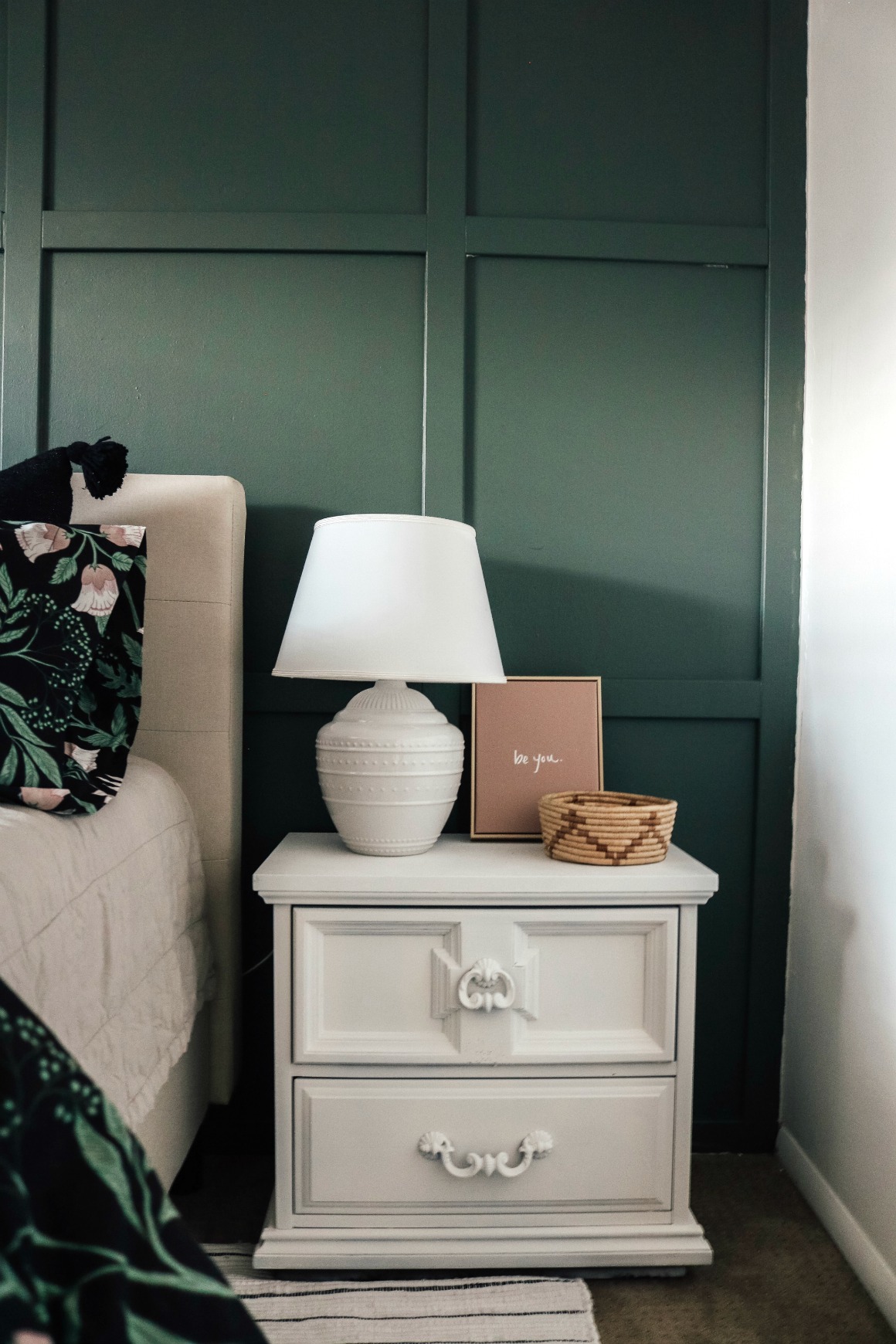 I typically like to find nightstands at second-hand stores! I always have. Both the nightstands that Kevin and I have in our master are from a second hand store. I think they add so much charm and character. Plus nightstands can cost a lot of money, where I prefer to put the money in the bedding! I found one nightstand for this room for $15!! I selected it because the scale was similar to the table my parents already had that we had painted too.

It is so easy to spray paint a nightstand with chalk paint, and we typically just go right over the hardware too. Super easy and always comes out better than before! We used Rust-Oleum Chalk Paint (Chalked Linen White Ultra Matte Spray Paint). We didn’t sand it at all. Then we sealed them in Rust-Oleum Chalked Matte Clear Spray Paint (highly recommend sealing). 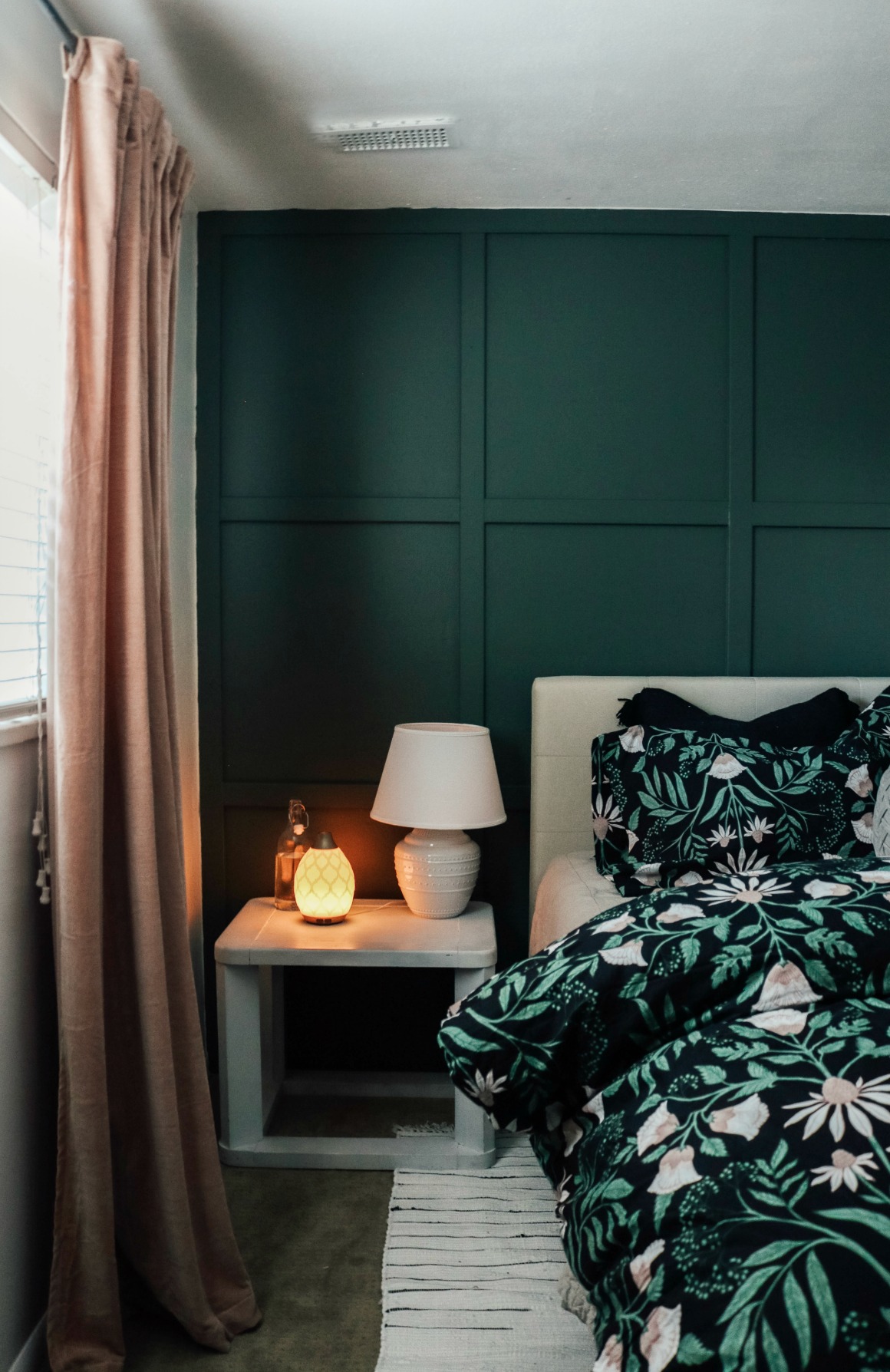 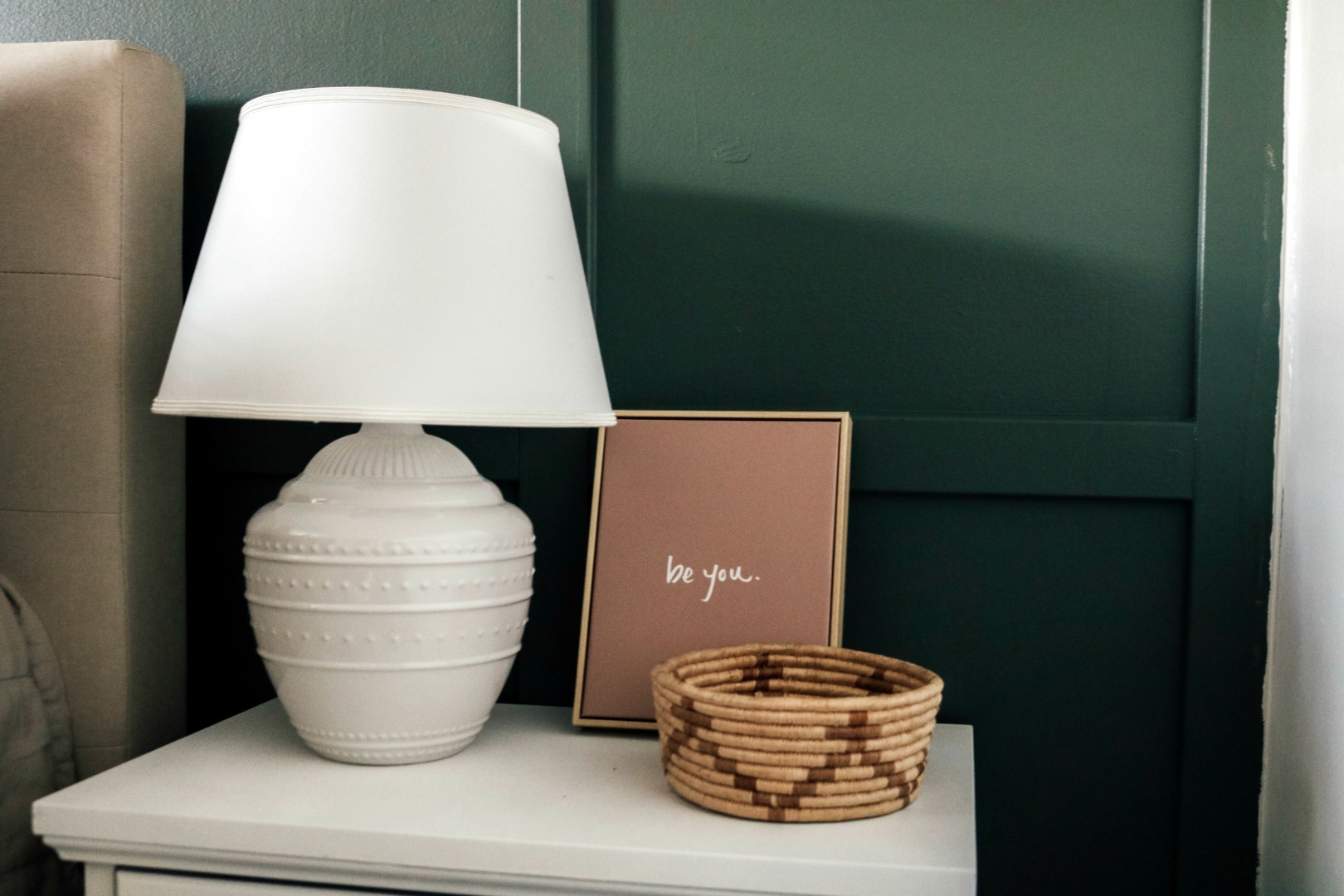 The lamps I found at Ikea, the “be you” art was at Target (can’t find online) and the basket I found at Good Will for 75 cents! I share these details so you have a source, but also to show that a collection of found items, no matter what you pay or where they come from can come together and look beautiful. And I love the little low basket to put rings, watches, glasses at the end of the day! (I need one for me now! I found similar here). 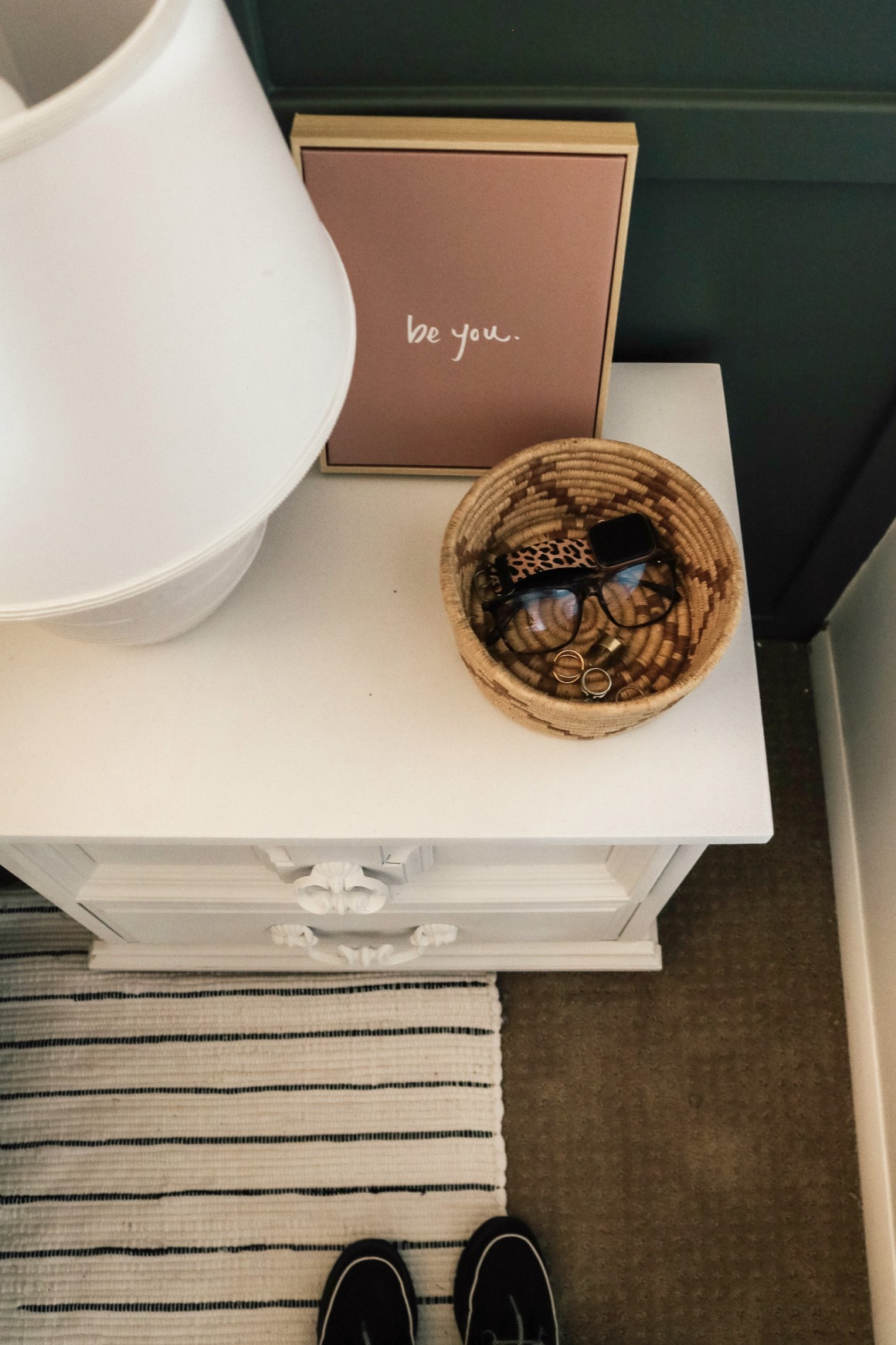 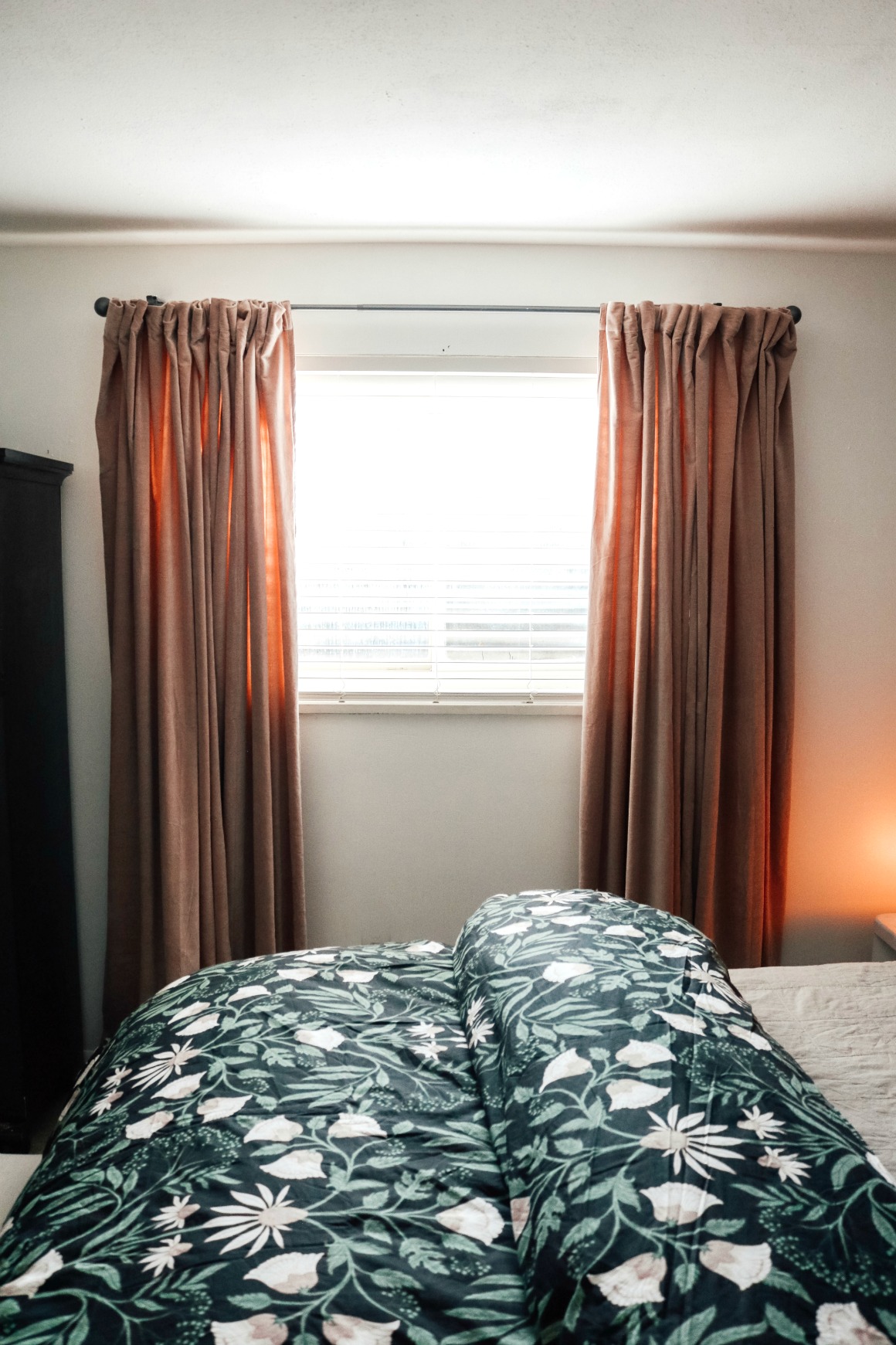 Curtains add SO much to a room!!! My mom had some sheer white curtains up before that were great. But I decided to order these velvet pink curtains to really cozy it up and also balance out the rich wall color and bedding. 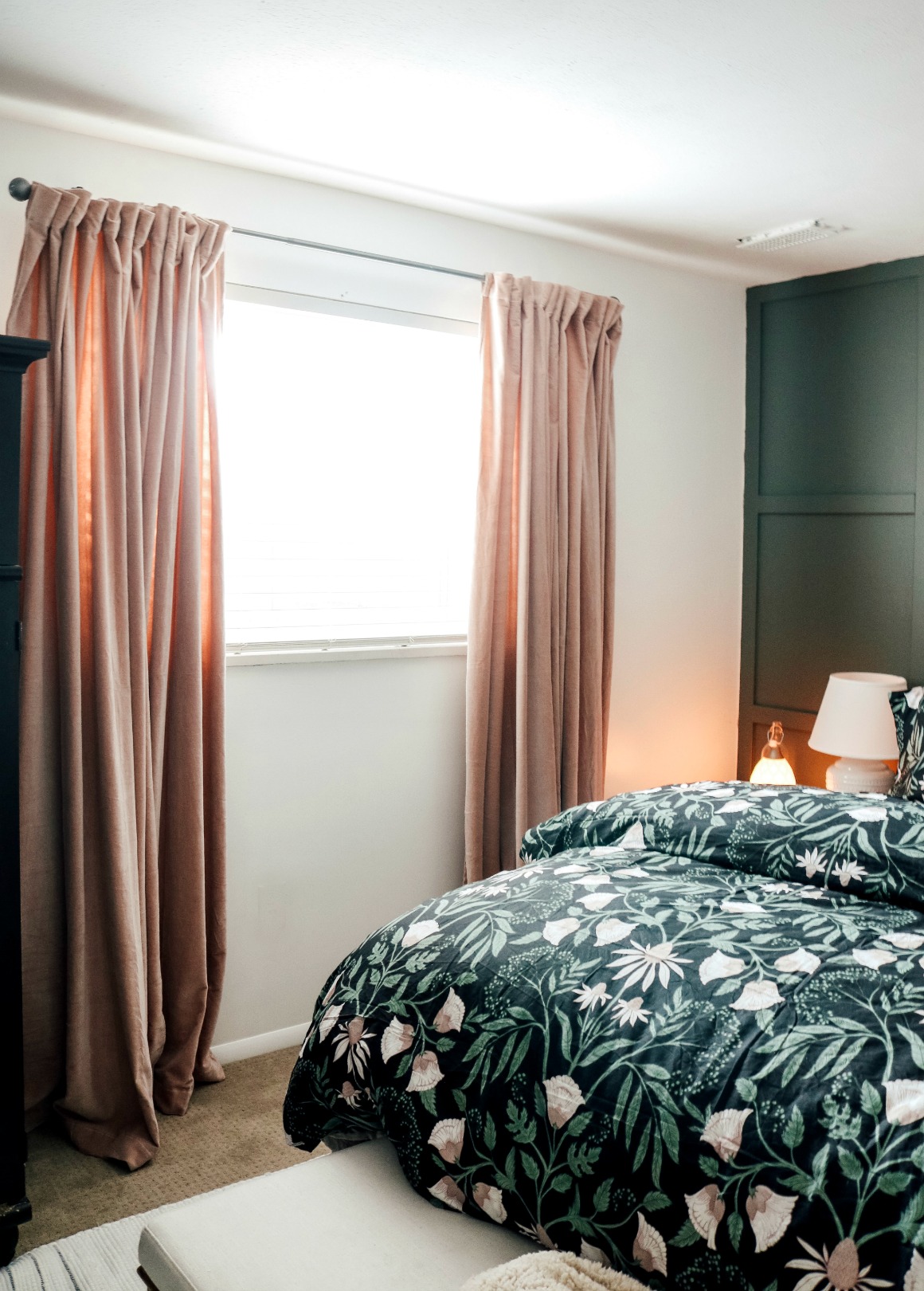 I also doubled up the curtain panels. I tried just one panel to see if it looked ok, but it felt too skimpy! You can see the difference in the photo below! When in doubt order two then return the extra set if you decided it is fine with one, but guaranteed you will like the two! 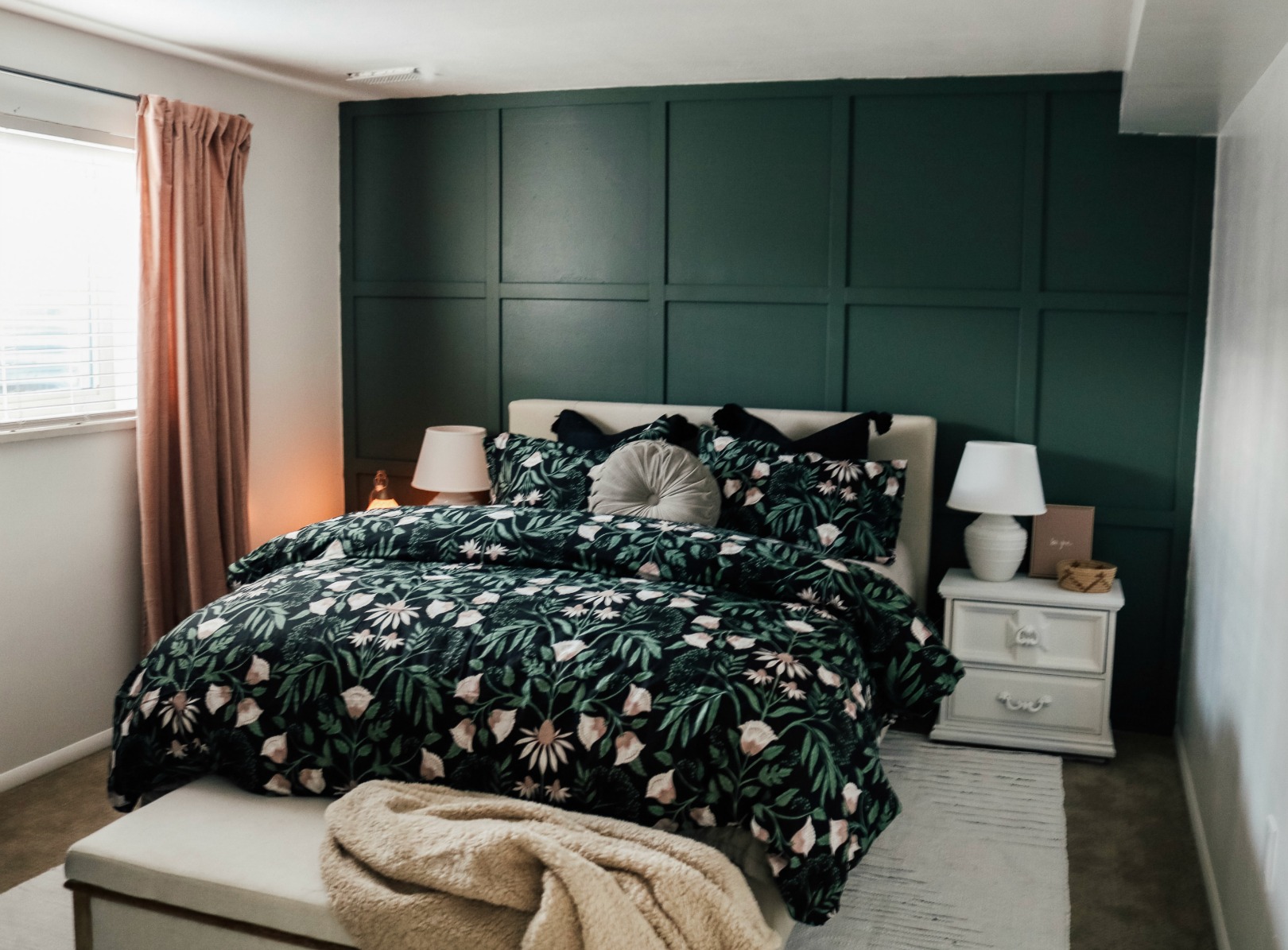 We LOVE it so much!!! And might just stay. haha! We will be back in the summer to enjoy it!

Click on an image below to shop the room- 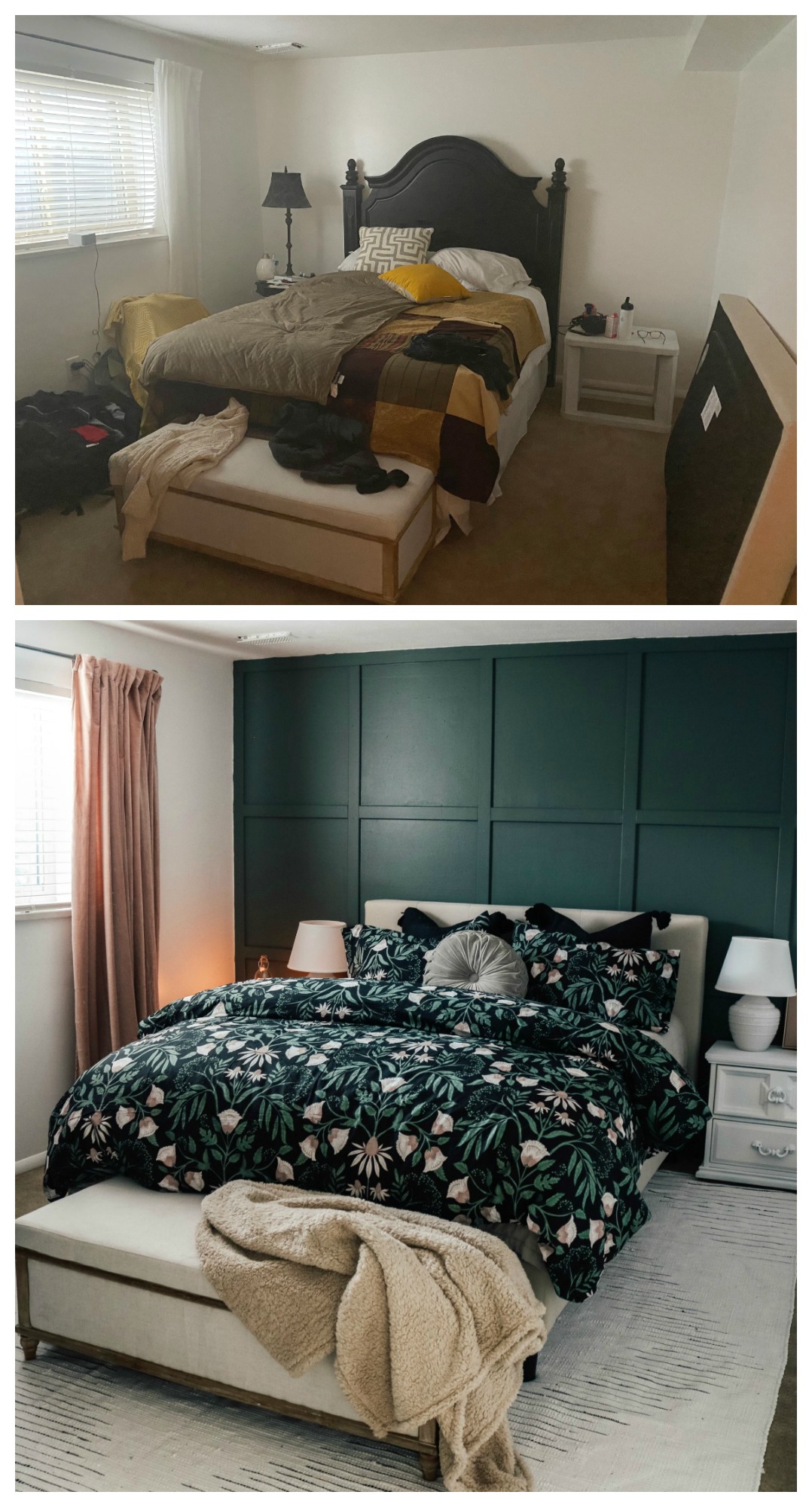 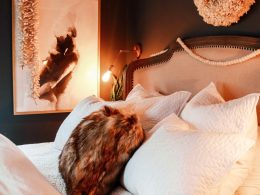 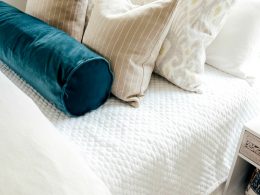 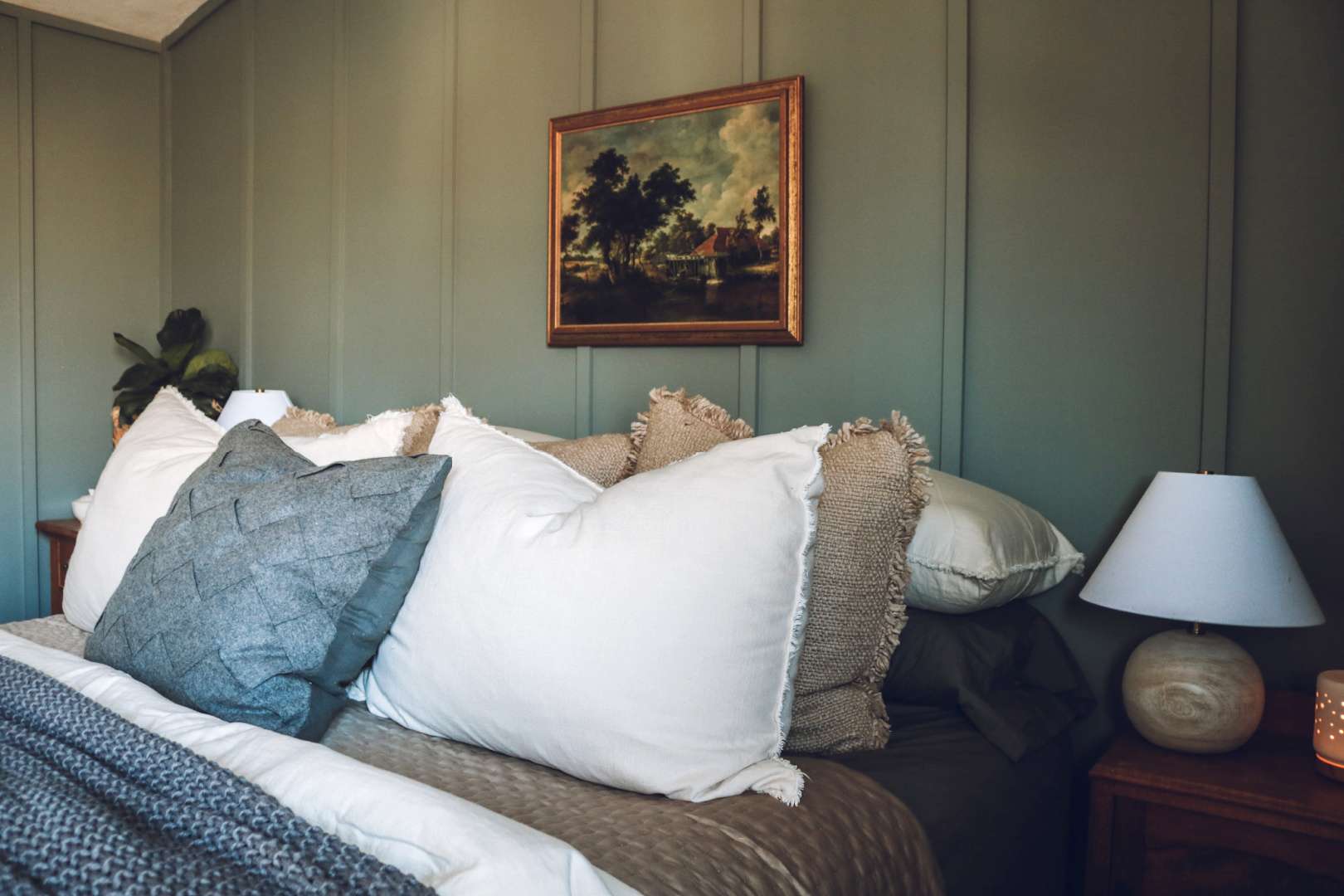 Yesterday we went to my friend Laila’s house to

Finally sharing the after of our basement family r

Good friends of ours mentioned that they wanted to

Made it home from Hawaii! What an amazing world we

Help me wish Finn a Happy 6th Birthday!!! I rememb

Happy Easter from our family to you🤍I love this