HGTV Magazine came out to our home (as you know) in October of 2016. It was a great experience and I shared all the behind the scene pictures on THIS blog post and how the shoot came to be. HGTV sent me photos that I could share with my readers! A full spread of the magazine. I thought it would be fun to share THEN and NOW photos and the why to some of the changes. Also on a personal note I want to have these photos on my blog, really such a bucket list thing for me.

I remember when the photographer was out he told me that the title of our article was going to be “1100 Square feet, 5 people and a piano” I thought that was a really cute title.

Keep in mind these photos were all taken October 2016 and the magazine wasn’t published until February 2018. This is a great way to see a space two different ways and to show that mixing it up can be really good! Personally it is how I keep my talents fresh and use them daily.

Piano and Entry photo from HGTV Magazine (THEN) I had to. I had to ask my family to snap a quick picture! Can you imagine us doing this every year? Finn might eventually be holding me! Kids change so much in a year and it is just a joy to watch. This was the first picture on the self timer roll and it was the last. Quick and easy. As you will see in the next photo that we got a new sofa and a new rug I thought the new peacock wallpaper went better with that look and then it snowballed to the pink piano. And to be honest the Paris Gray from Annie Sloan always felt a little too purple to me, now it is  Chalk Paint in Antoinette . We still have the clock you can see it HERE we painted it bright white, now we have THIS gold mirror above the piano-love accenting with the gold. 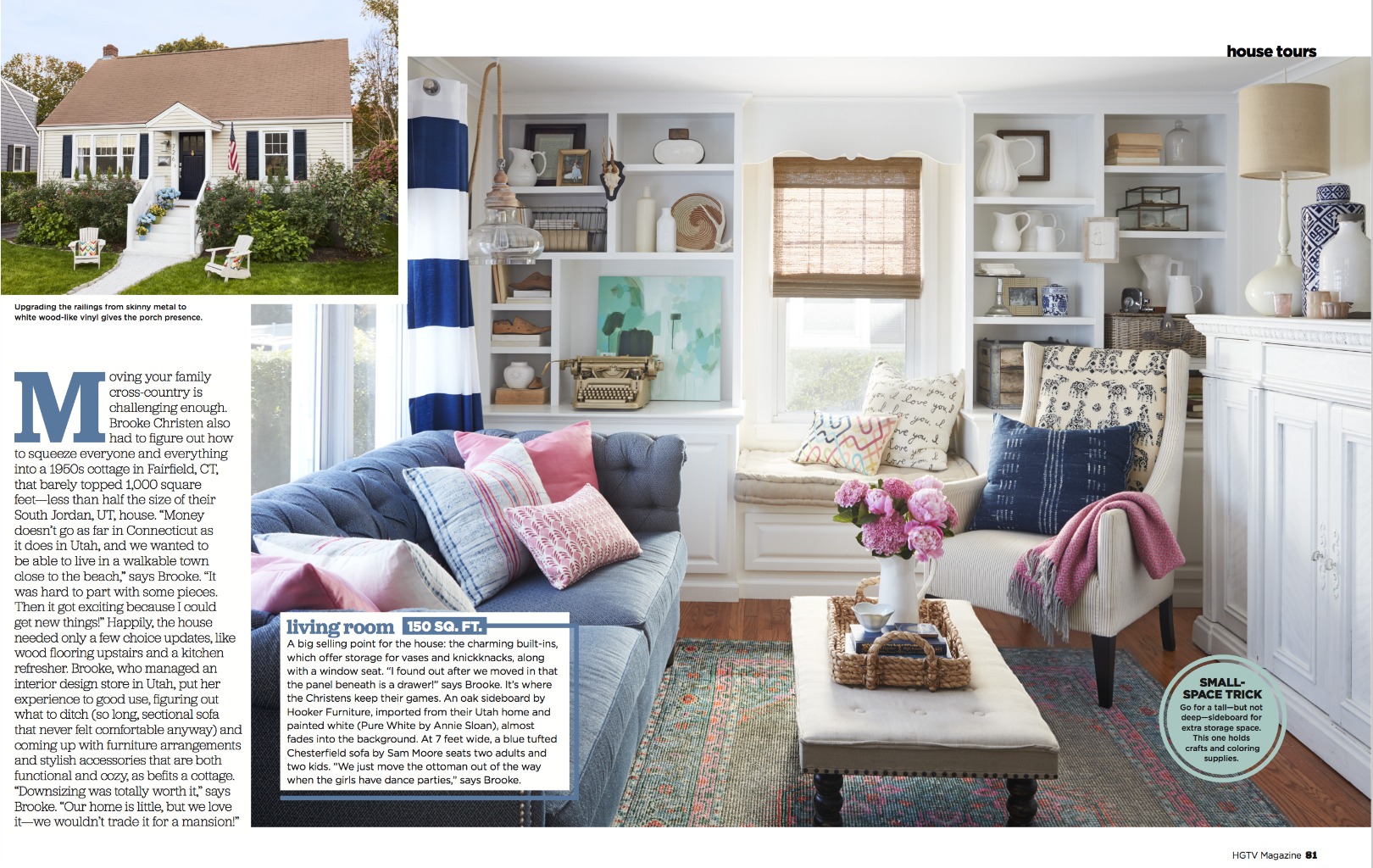 This room underwent a lot of changes! I really like it both ways. With the big sideboard replaced with the smaller Secretary Desk and bigger chairs replaced with two small scale swivel chairs it feels more spacious. I LOVED that rug with the navy and pink and we still have it up in the girls shared bedrooms (you can see it moved HERE). We also like a little more neutral vibe to flow with the rest of our home. I know it shouldn’t be an issue- but we remodeled the kitchen after we moved in and I went with the black and white cement tile- I felt like it didn’t flow as well with the navy. Do I think it is bad design? No. Every room does not have to match. But I will say in a small home it does help with the flow and also the ability to mix pillows an accessories is between rooms is a perk! Also notice the decorative wood valance is taken down now too. Something I had wanted to do, but it felt too hard. Nope not hard. Kevin did it in like 15 minutes with touch-up. (You can shop this room HERE). Interesting the things we put off doing because is “seems” too hard in our minds. Just start!

Kitchen photo from HGTV Magazine (THEN) Well the biggest change in the kitchen is the built-in banquette. I did love that settee so much, but we really wanted more seating and storage (the banquette seats open up see HERE). This was always my plan for the space, but just had to take it in steps, be smart with money. Same marble top to the table, I just switched out the base for something smaller and more modern. We also switched the chandelier but they didn’t take a picture with the original one in the shot, it felt too busy. Over by the stove they did stage that for the magazine shoot. The roman shade is new. The one in the magazine shoot was just a shade I found at Bed Bath & Beyond for a quick fix right we moved in. Eventually we got THIS custom roman shade that went inside the molding in a darker fabric to tie-in the dark floor. (BTW I do like how they cleared that space by the stove so you can see more the subway tile, but it isn’t practical in a small kitchen).

Finns Nursery and Master Bedroom from HGTV Magazine (THEN) Finn’s nursery is really the same they just moved the bookcase because they said people write in and complain that a crib shouldn’t be by a window. I really don’t know why?? I googled it and I guess the potential issue would be a broken window? Or babies opening the window? How? I have actually have had people leave a comment on Social Media regarding the crib by the window. I respect that they don’t want to do that in their home, but in our house it works just fine. It is the only spot for the crib and we have a lock and a security system so we don’t find it a problem. Ok enough about that. Over by the daybed (that we have for extra guests) we did get new zip-up bedding from Beddy’s Bedding. Also the green art by the bed was in the front room when they shot this room.

PS- our Master Bedroom hasn’t changed much but I will show that next week with some changes, like new bedding!

Girls Shared Bedroom and Back Deck from HGTV Magazine (THEN) Girls Bedroom has new wallpaper, both were temporary and easy and fun to change up. New fan instead of the antler chandelier- this room is upstairs in the cape and really needs a fan. Thankfully I finally found THIS Fan that we love. Changed up the curtains to tie-in the new fan too. The bedding was staged for the magazine with those flower pillows, not my personal taste at all, but I see why they went for the “HGTV look”. Below is the back deck- A LOT changed there. Basically we love it way more. We took out the navy and went with black! Again it flows the rest of the house so nicely, especially by the kitchen. You can see it all HERE. I hope that was fun to take a glimpse of then and now. Shows that there is not ONE RIGHT WAY to do anything. You can also see the family room upstairs and Shop our Home HERE. 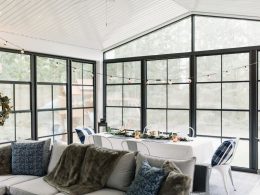 I took that before photo of this house 2 years ago

Winter porch✨welcome in! I have to say this 1970

Happy 12th Birthday Lola Loo!!! We sure love every

Christmas Home Tour of our main floor! Nothing lik

Ok aren’t you surprised at how cute these rattan

Happy Thanksgiving!!! Thankful for you 🤍the fri