As soon as we moved into this home we immediately took down the ceiling fans. There were three fans in this 1950’s house. Two in the bedrooms upstairs and one in the kitchen. They were really outdated. I couldn’t get them out of here quick enough. I replaced the ceiling fans with chandeliers. Summer came and we learned that we might need the ceiling fans. The home does not have central air. So we had to buy the ugly window units and I really hate those the those most! So I was thrilled to partnered with Hunter Fan because they have the most stylish and modern ceiling fans I have seen. I am kind of dying over how good they look in our daughters bedroom and family room. Not to mention now we can stand to be in the rooms when it gets over 75 degrees outside. Ok enough talk, see for yourself… 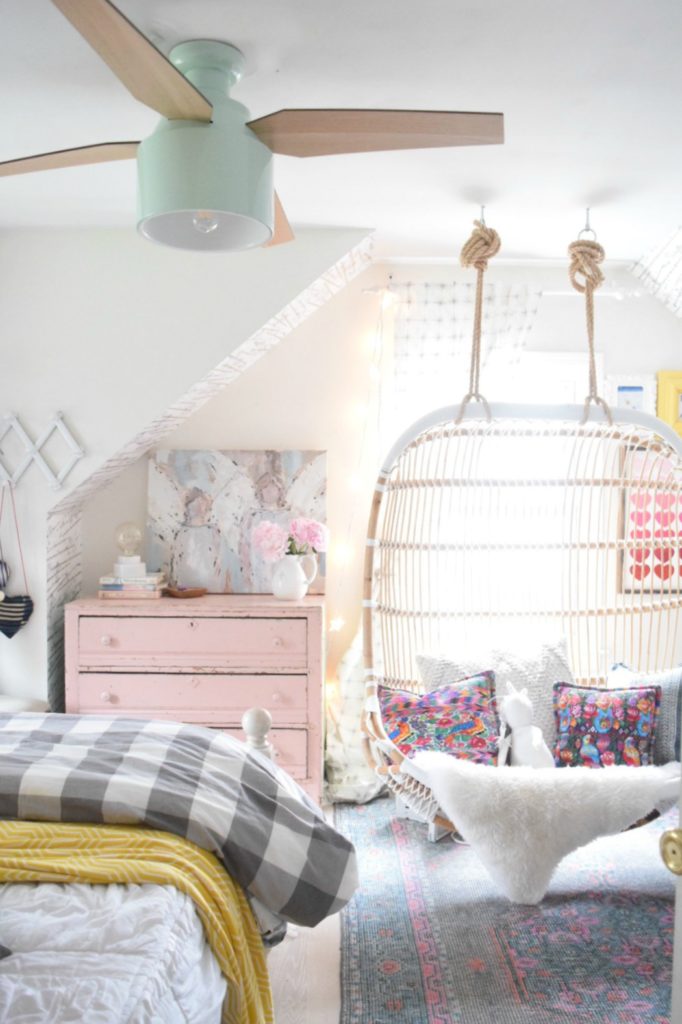 Isn’t this mint fan so cute? Or maybe cute isn’t the right word, retro is a better word to describe it. (We did THIS mint green fan, The Cranbrook). 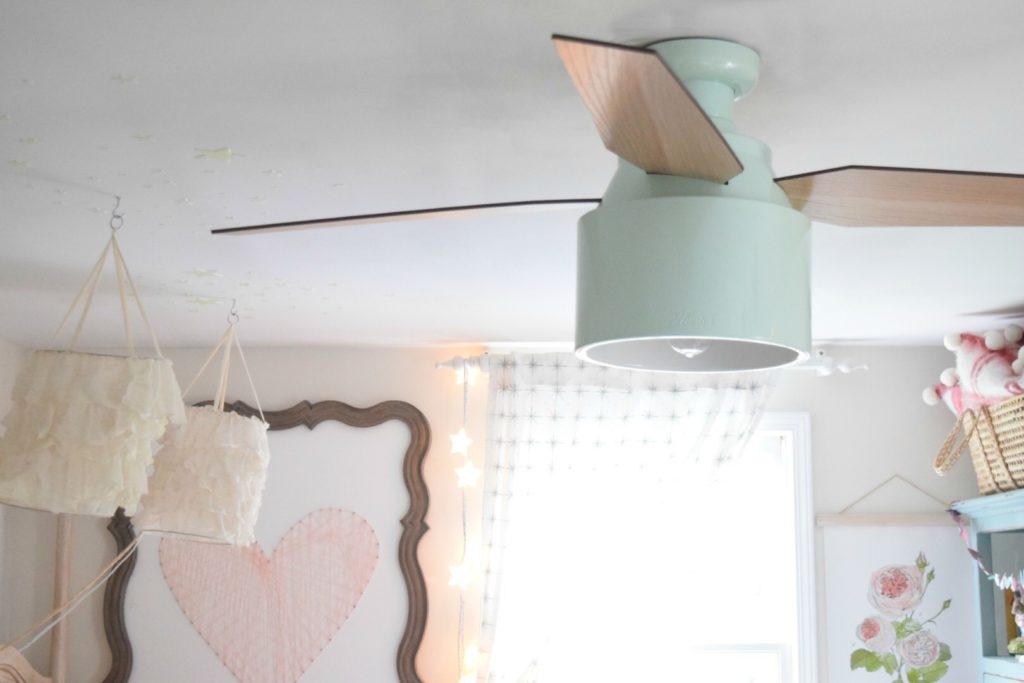 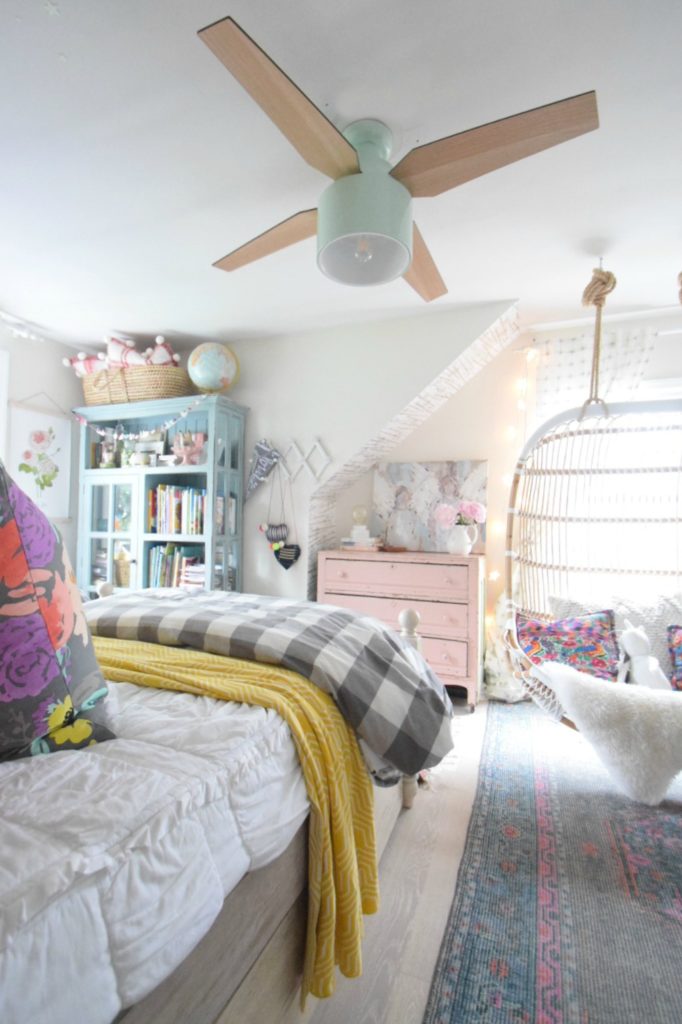 We still have and love the antler chandelier we had up (I saved it). But I am hoping with this new Hunter Ceiling Fan we won’t need to install the window air conditioning units (fingers crossed). 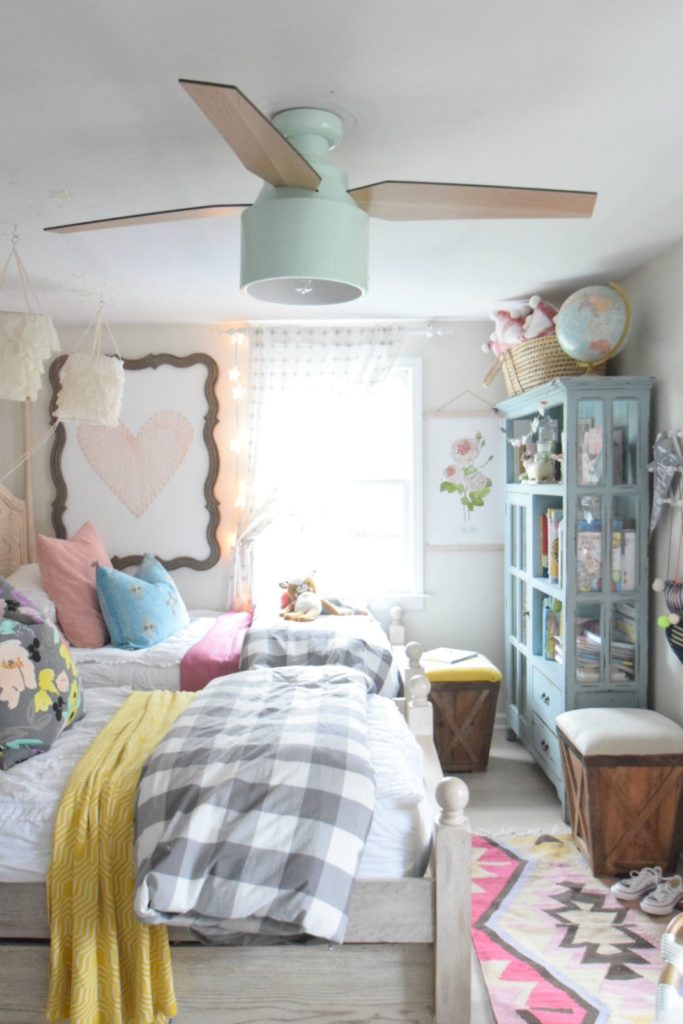 I was going to have my husband install the ceiling fans because he has switched out other lights in our home. He took the ceiling fans out of the box and said “it looked to tricky”. I am actually glad that he decided not to attempt it. 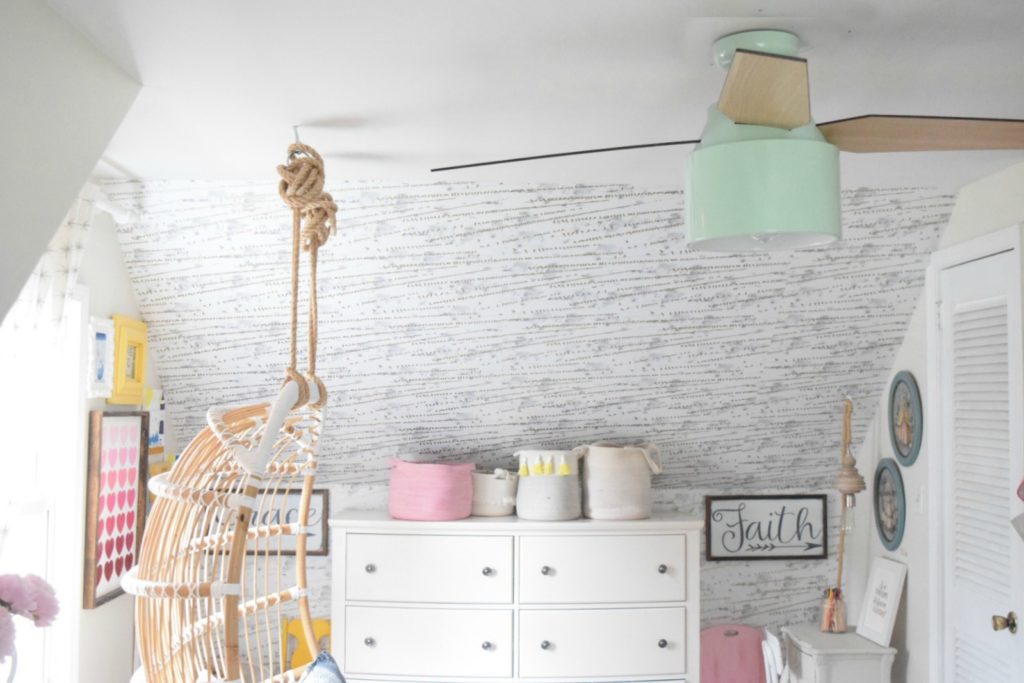 We hired an experienced electrician and it took him about three hours to install both ceiling fans. He had to switch out the electrical box for a heavy duty one that could hold the weight of the fan. Even though there was originally a fan in this spot the fans are very different quality and weight. I recommend hiring a professional! 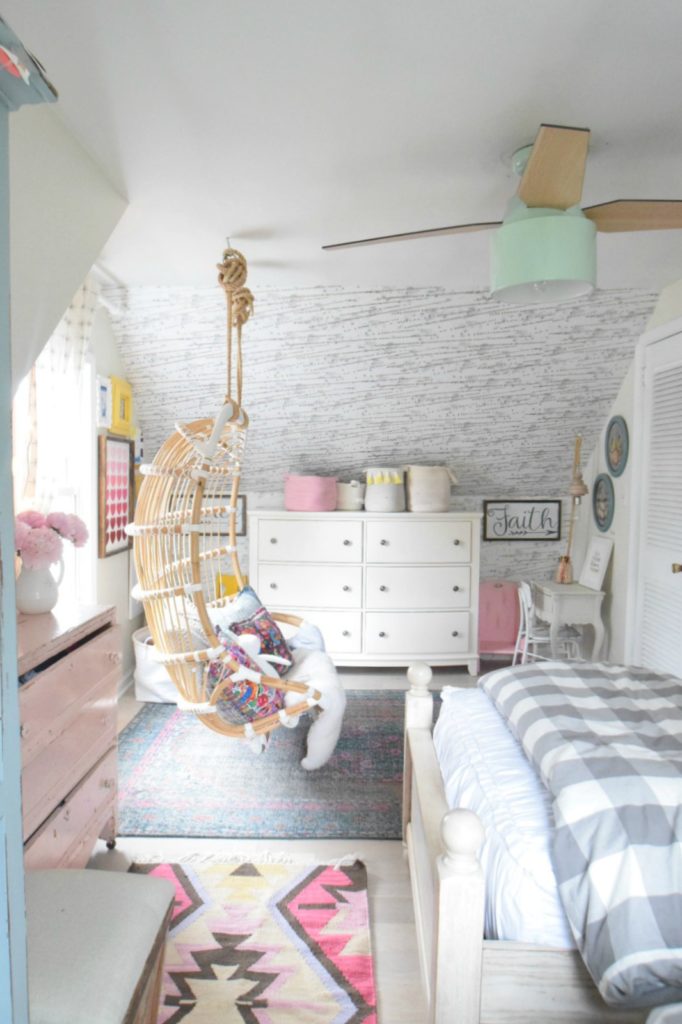 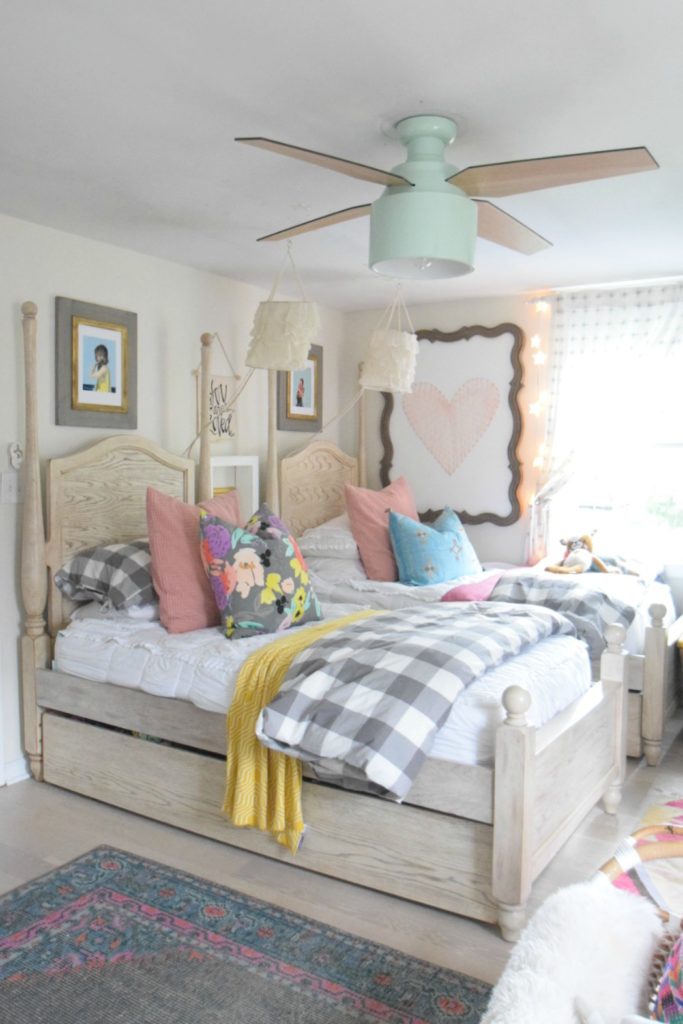 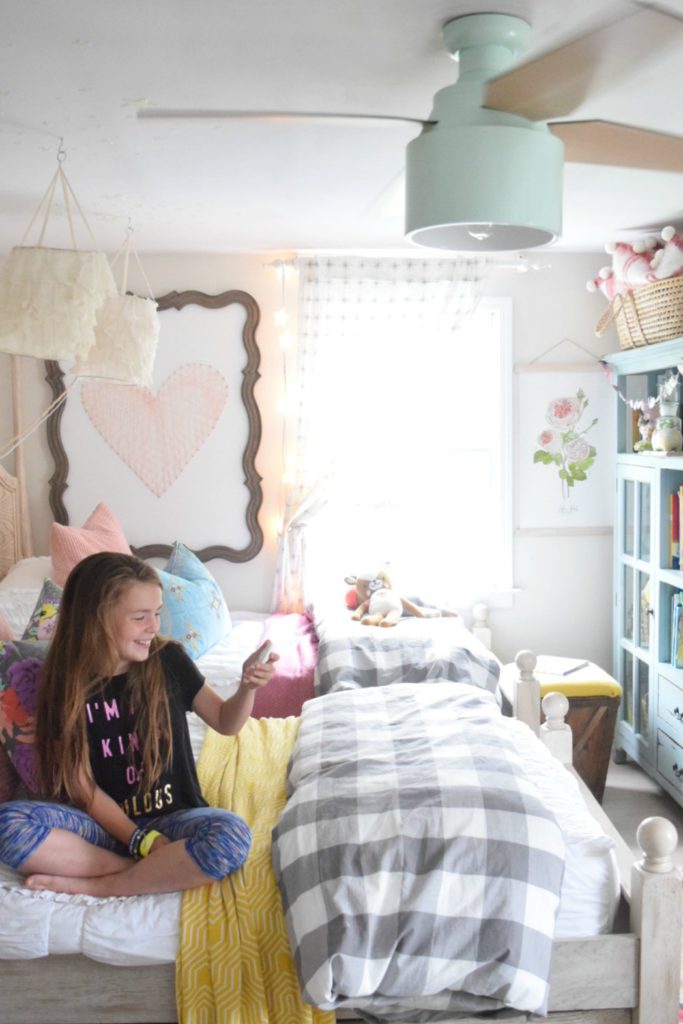 My girls are excited to use the remote control that came with the Hunter Ceiling Fan. They can easily switch the light on and off when they are in bed or adjust the fan speed from one of the three different levels. 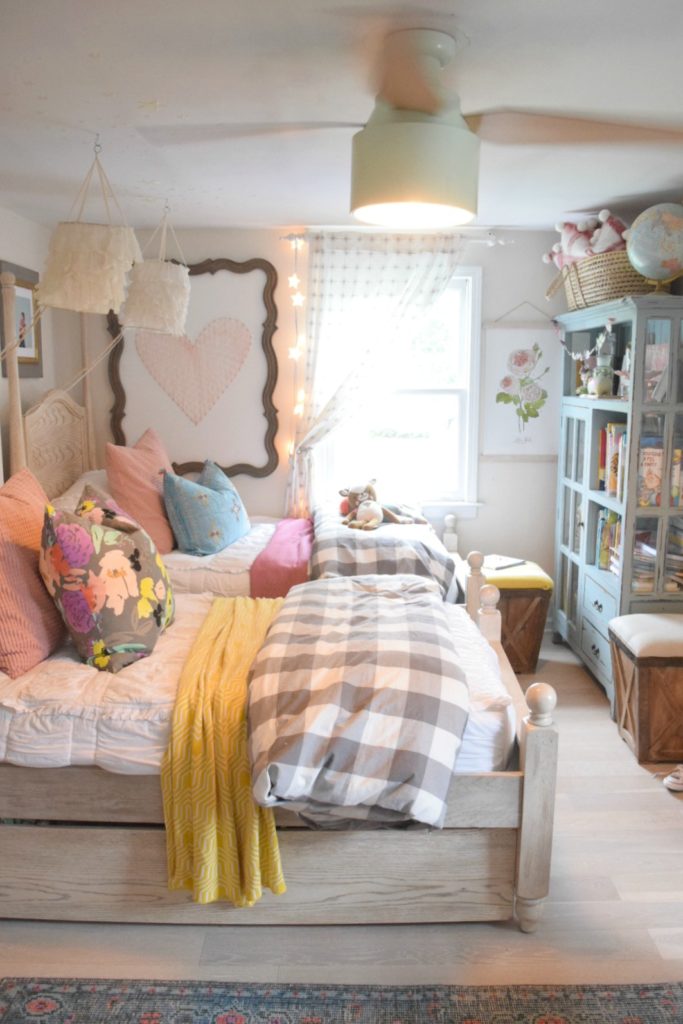 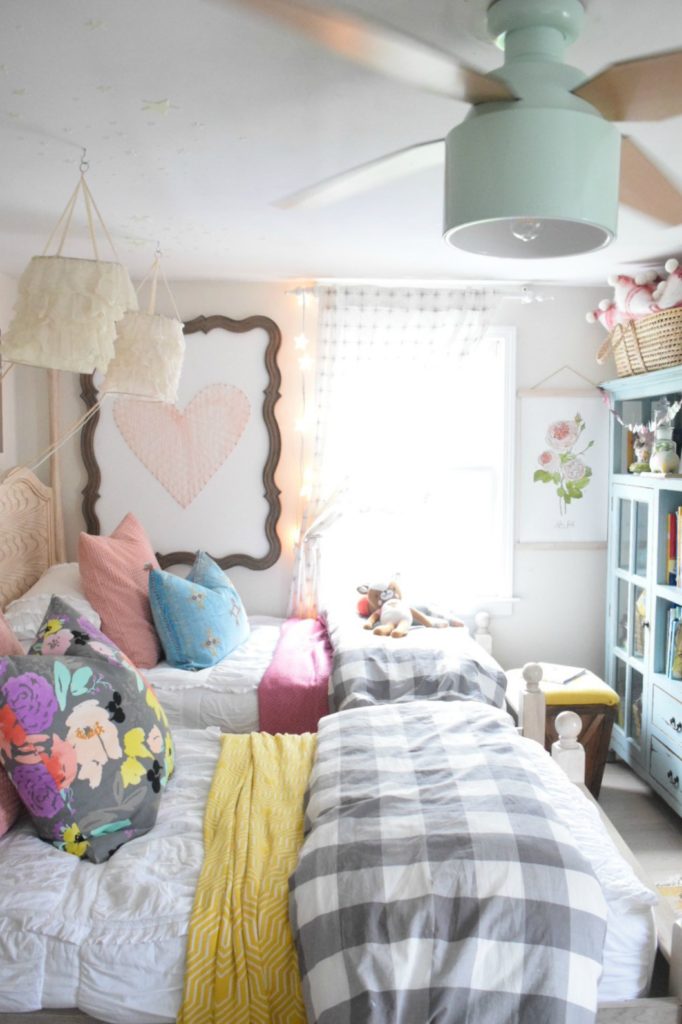 There are two rooms on the second level of our cape. If you have a cape or a split level home you know how  stifling hot upstairs can get. We decided to add a fan to the other room as well. It is our family room and doubles as a guest room. 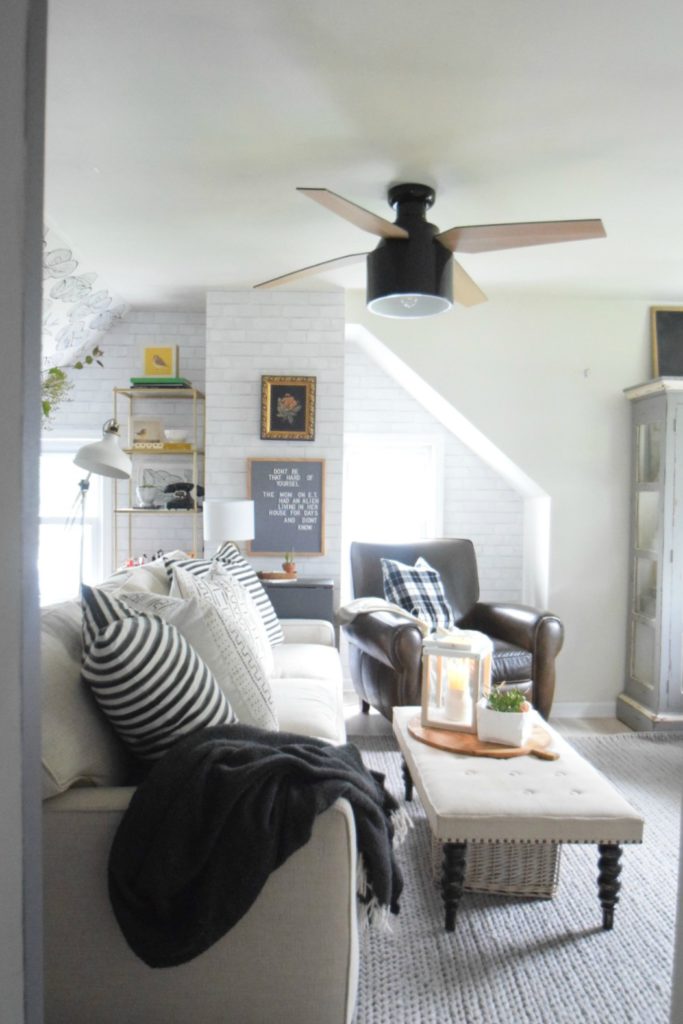 We did the same retro, modern style ceiling fan in this room but in gloss black. I LOVE this one too! (We did THIS black fan, The Cranbrook from Hunter Fan). 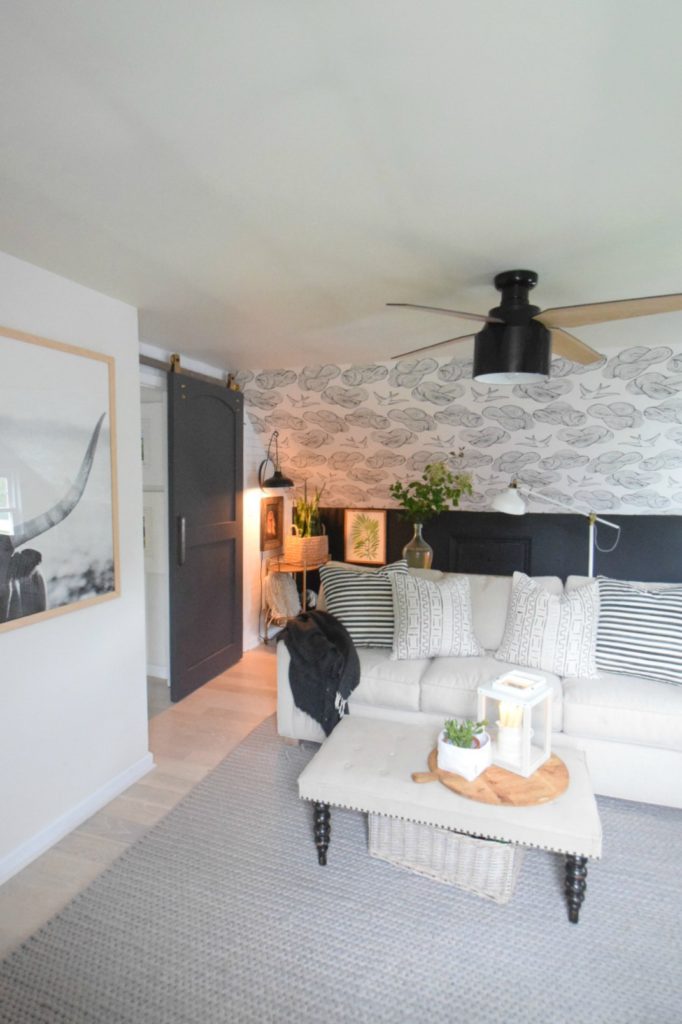 Visitors stayed with us all last week and slept in this room. We hung out in here too and watched movies. The new ceiling fan kept the room nice and cool. I was really happy with how good it felt and how quiet the fan was even at the highest speed. The fans came with Edison light bulbs that put off a nice warm glow. I typically don’t like to turn on overhead lights, but these are a really nice accent light, not too bright or harsh. What do you think of our new ceiling fans?

I also loved The Hunter Ronan Fan with the gold accents but it was a little too big for our tiny bedrooms. I just ordered it for a client and I will have to show you that when it is installed. 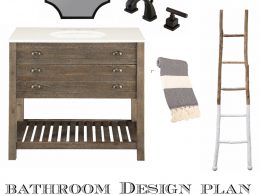